I don't know how long people are expected to live these days, but I recently turned 41. In the not-too-distant past I would be expected to have adult kids by this age or even be a grandparent. In the middle ages I would probably be dead already. Thankfully, I'm in neither of these camps, but I do have a daughter who has just turned four. Watching someone growing up does give me pause to ponder my own mortality, which is something my carefree alter-ego would not even think twice about.

My conclusion about the best-case scenario for my future is this: Before I die, after a long and happy life, I would like to have my consciousness uploaded into a vast amoeba-like cloud of pure energy that would float through space for all eternity. I would look down benevolently upon the mortals in countless star systems and perhaps even be worshipped as some sort of god-like creator. I realise this is probably a long shot, but a guy needs to have goals!

People are living longer these days. While buying a birthday card recently, I noticed a whole section of cards dedicated to people who have turned 100. When I was younger this would have seemed inconceivable that so many would reach this milestone, but now it's a common enough occurrence that greeting-card companies seem to think they can turn a profit by exploiting this fact.

So I think that middle-age is more of a state of mind than a pre-determined number. I can sense it creeping up on me like a stalker when I find myself feeling self-conscious doing things that I've always enjoyed and wondering if a man of my advancing years would appear dignified to others. Middle age is like a second adolescence with less acne and no sense of expectation for the future.

To try and find a way to traverse these dangerous waters I find it best to consider an example from  the Baby Boomer generation. A textbook example of a mid life crisis, I believe, is Bob Dylan.

Nobody captured the Baby Boomer promise of youth more fully than a young Bob Dylan and I don't think any image of Dylan illustrates this promise more fully than the cover of his second album 'The Freewheelin' Bob Dylan': 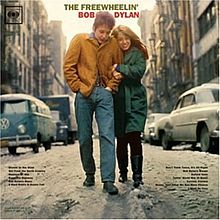 It's such an iconic image of Dylan wandering along frozen New York streets with his best girl by his side - smiling and braving the cold. They carry on regardless, knowing that nothing will stand in their way as long as they have each other. In short, it captures the idealism of youth and is a great precursor do a decade of turmoil and innovation on Dylan's behalf.

Things started to change in the 1970s for everybody as the music industry became bloated, excessive and complacent. Dylan was still a massive cultural touchstone but as the 1970s turned into the 1980s he started to flounder.

The 1980s could be considered Dylan's 'middle aged' period. Although, in my opinion, he still had the occasional good song, he was not making classic albums and was bogged down with the wrong producers, experimenting with synths and hokey spirituality before cruising out the remainder of the decade in 'The Travelling Wilburys'.

I would argue that this period was important for Dylan because it made him realise what his strengths were and he returned to a more rootsy sound in the 1990s. During this time he made one of his best regarded albums in 1997 with 'Time Out of Mind'. A health scare also contributed to the focus of the album as well as perhaps one of the best looks he has ever adopted: 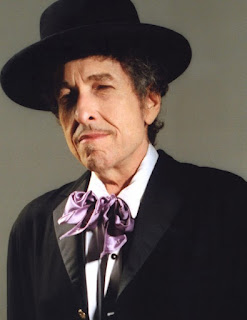 He looks positively wretched! But I like it better than any look he adopted in the 1980s. He's like some sort of zombie-monkey-skeleton that has been resurrected as a riverboat gambler in the late 19th century.

It makes me realise that there is hope for the future. While it would seem that a mid life crisis may be important in helping you realise your strengths so you can define yourself in later life, I would rather just skip the experience entirely and just continue on to the wizened sage-like-enigma period of my life.

So, dear reader, if in several centuries time you ever encounter an amoeba-like cloud of pure energy floating through the cosmos wearing a stetson hat and a pencil-thin moustache then stop and say hello - It's probably me.