I never get accused of being overly romantic, but there are certain objects and pieces of music that I feel a fond attachment to because they remind me of people, places and good times. One such object (and piece of music) is the Talking Heads debut album 'Talking Heads: 77'. I was buying this album when I first met my wife. 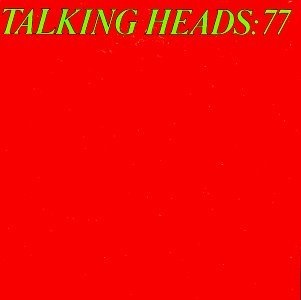 It was at radio station 4ZZZ's market day in the mid 1990s. We were both playing in bands that day and were introduced by my friend Cass. My wife's going to kill me for saying this, but she was wearing a summery dress, long socks, short hair and her trademark impenetrable-yet-eternally-unimpressed gaze. I'm sure there might have been other girls around at the time who would have easily fallen under the spell of my ample charms, but I found the challenge of impressing Edwina irresistible.

It is now some 17 years later and I still don't think I've managed it. I was watching an interview with Nick Cave recently and he was asked what kept him writing music. Nick replied that he was constantly trying to impress Mick Harvey. Maybe I would lose all motivation if I managed to impress Edwina.

Some may say that 'Talking Heads: 77' isn't a particularly romantic album - especially with it's most famous single being 'Psycho Killer', but most of the songs do deal with relationships even if it's with inanimate objects such as 'The Book I Read' or the building where you are going to live in 'Don't Worry about The Government'.

There are, however, a lot of the songs which are specifically about human relationships even if they might have cynical overtones; such as the jaunty album opener 'Uh-Oh,  Love Comes to Town', the militaristic sounding 'Tentative Decisions' or the tense and neurotic 'Who is it?' The album does finish on a high note, though, with the simple but effective 'Pulled Up' which is about rising above despair because somebody has faith in you... If that song isn't a perfect summation of new love then I don't know what is!

Beyond the music, however, there is an air of cautiousness between the musicians. As this was their debut album, Talking Heads were still developing their relationships as well. The chemistry between the band members is undeniable and you can sense the excitement and the feeling of possibilities that the band can explore. I like this early period of the band for this reason and find it more interesting than their 'Stop Making Sense' period where Talking Heads are overshadowed by too many session men which makes it seem like more of a 'Las Vegas' version of the band. 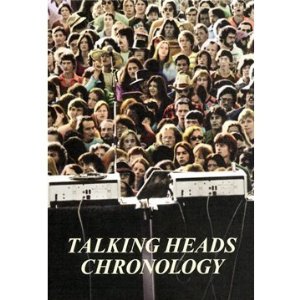 I recently purchased the excellent 'Chronology' DVD by Talking Heads which has some very early footage of the band performing, as well as some TV appearances. The band always seem very shy and guarded in TV interviews but on one occasion bassist Tina Weymouth uncharacteristically and candidly said she hoped the band would go down in rock history. You can sense this pull between this caution and ambition on 'Talking Heads: 77'.

If you don't think 'Talking Heads: 77' is an analogy for young love then I probably shouldn't mention where I invited Edwina to on our first date. I was obsessed with this band from Logan City in Brisbane called Just Bitchin' who had just released a debut EP called 'I Like to Fart'... It was terrible! When I look at the EP now it seems like the whole thing was just a front for some sort of drug-ring as the inside cover had contact details underneath a bowl of chopped-up marijuana. The half baked songs mainly concerned running away from the cops.

Edwina politely declined my invitation to attend one of their concerts - but it was an important test for a young relationship - 'How much of my puerile sense of humour are you willing to take?' It seems Just Bitchin' was a step too far, but at least Edwina found the invitation amusing. I, myself, wisely did not attend the concert either.

Considering that Just Bitchin' is the other option for our relationship album, I think slow-dancing to Psycho Killer by Talking Heads on our next anniversary doesn't seem like such a strange idea after all.