One of the first forays into parenting I remember taking was an informative but mildly humiliating class at the Royal Women's Hospital in Melbourne. I felt like a school-boy as I listlessly sat at the back of the class while we were instructed on how to fold a nappy. I was vaguely paying attention and probably trying to stick spit balls to the ceiling, when all the males in the group were suddenly asked to demonstrate what they had just learned in front of the class.

A wave of terror crashed over me, but luckily I muddled my way through and was only mildly chastised by the midwife taking the class. My reasoning for not paying strict attention was that if I didn't get it right the first time, then surely I would have plenty of time to practice?

During the same class a video was played of a woman giving birth at home under a midwife's supervision. They described the different types of drugs available - from mild pain killers to basically not feeling anything from the waist down, like some sort of unfortunate passenger in an horrific car crash. The woman in the video had a reasonable amount of chemical assistance, but that did not stop her from screaming as if she had just been splayed asunder from within.

'And this is a best case scenario!' the midwife added with a sadistic grin.

The strangest part of the video happened moments after the birth when the woman, exhausted, sweaty and covered in various types of her own bodily fluids was handed her baby and exclaimed 'That wasn't so bad after all!'

Everybody burst out laughing.

The midwife explained this phenomenon as 'selective amnesia' and said it was most likely an evolutionary phenomenon that allowed women to forget the horrors of childbirth, so that they could continue having children without being haunted by the horrors of the first time.

When my daughter Clementine was born it didn't seem as bad as the video (but then I wasn't the one doing all the work) and my wife didn't seem permanently traumatised. Also, I was proved correct and over the intervening years I had plenty of opportunities to change my daughters' nappies.

She's four years old now and luckily those days are over, but this week we went to the doctor for something I had been dreading for some time - the four-year-old vaccinations. All previous vaccinations were fine because she was too young to understand what was happening. This time, however, we had to think of a cover story and decided the truth was the best option (or a version thereof). My wife and I decided to tell Clementine that she would be having an injection that would hurt a bit like a bee sting but it would give her super-powers like her favourite animated super-hero 'Bolt' - the wonder dog. 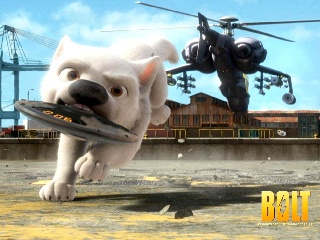 I watched her excited face as she went into the doctor's office ready for her injections and could feel tears welling up in my eyes. Earlier in the week I had been watching the new series of comedian Louis C.K.'s show and he had wisely stated that 'parent's are the first assholes your child will meet'. This phrase echoed with me as we walked into the doctor's office.

Before the vaccinations there was a questionnaire to see how Clementine had been developing. A sense of panic set in. I didn't know I was being tested as well! Suddenly I felt as I had in the parenting class when I was asked to fold a nappy.

We were asked general questions about Clementine's sleeping and eating habits and Clementine was asked to identify colours and to draw a picture. She's pretty good with verbal communication and identifying things but not much of a drawer at this stage. I felt like interjecting and saying it wasn't fair because she was asked to draw with pencil and paper when she is much better at drawing with the iPad.

Luckily we seemed to pass the nurse's scrutiny and for another year I can sleep in the knowledge that A Current Affair aren't going to knock down my front door and try to 'interview' me as part of their 'parental monsters' expose.

Clementine only cried a little bit during the injections and honestly I think we felt worse than she did. On the way home I bought her a book as a present for 'being brave like Bolt'.

While Clementine was recuperating pictures of her as a baby and toddler came up on our computer screen-saver. In almost all of them she looked happy and was smiling. These photos, following the events of the day and how well she had coped, made me realise that she is growing up and those days have passed. I filled me with a sense of sorrow which I suppose could be called nostalgia.

A friend of mine visited from London a while back and reminded me that on his previous visit Clementine was throwing up after every meal. I was surprised at the time that I had forgotten such a major inconvenience. It occurred to me that men get selective amnesia as well. If I think hard I can access all the suppressed memories that make the parenting experience not so rewarding: Tag-team parenting, social isolation, endless boredom, sleepless nights and temper tantrums. None of these aspects incite feelings of nostalgia, but even with these hurdles I would have to concede that ultimately it's all worth it. Especially when you see your child making progress.  I guess we'll keep her - for now.

A few hours after the injections, Clementine asked when her super powers are going to start working. I wonder if children get 'selective amnesia' as well?

Email ThisBlogThis!Share to TwitterShare to FacebookShare to Pinterest
Labels: Parenting