I don't go to the pub nearly as much as I used to. On a rare visit a couple of weeks ago it occurred to me that I've used up all my drunken pub stories that I endlessly re-hash by including them in this blog. You, dear reader, are my equivalent of a long-suffering but patient friend who wearily listens to the same-old stories as I blather on until time immemorial.

One observation that I've failed to include in a blog so far, and that I always mention to Melbourne friends (especially those who play music), is that people involved in the arts in Melbourne seem to think there's no conflict of interest between pursuing a more intellectual pursuit such as music or poetry and barracking for your local footy team on the weekend. You can't have it both ways! In Brisbane when I was growing up you had to choose one or the other.

Granted AFL is the sport of choice in Melbourne and I will concede that it is way more graceful than Rugby League, which is the king of sports in Queensland. However, there probably isn't much intellectual difference when you consider players from both codes are prone to waking up in pools of their own vomit on the pavement outside of casinos. I will admit to a double standard here. If Keith Richards did something similar I would probably say 'good on ya mate', but if it's some overpaid AFL star, then I'd probably cluck my tongue like some mother hen and say it was disgraceful!

I think part of my disdain for organised sport came about from the undue emphasis put on it at schools. It seemed like any drooling troglodyte could get a scholarship if they were halfway decent at Rugby and school funds seemed to be poured into ovals and sporting equipment rather than cultural or academic endeavours (the art building at my high school was a demountable building by a river that would regularly flood).  I also think that Rugby added to the 'cultural cringe' aspect of Australian culture where any form of art that did not come from America or England was seen as 'inferior'. Rugby was okay to like because it was a Queensland product and had no airs or pretensions. 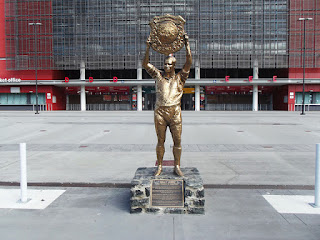 My dislike of Rugby in the early nineties was so intense that once I was having a discussion with a guy in a pub and he mentioned an altercation he (allegedly) once had with Rugby League legend Wally Lewis. Apparently my drinking buddy once called King Wally a 'dickhead' and was subsequently pinned against the wall as Wally 'tried to strangle him' and dared him to say it again. In my mind this put  my friend in the league of a folk hero such as Ned Kelly rather than a loud-mouthed idiot who was probably just spouting a bunch of bullshit.

I'm not so gullible these days and I really don't have anything against people who play sport, but I can't understand why people watch it. Every time I see a cricket player standing motionless in a field on the TV I'm instantly transported back to my childhood and long afternoons at home in the stifling heat. I can still hear the sound of lawnmowers doing their endless ballet with machines in adjoining similar-sized tract-housing blocks separated by steel-mesh fencing. When I watch TV I'm hoping to be transported to somewhere beside the mundane and televised sport doesn't really do it for me.

I suppose ultimately I've never understood the 'Us' versus 'Them' mentality especially when people will refer to a win by their team on the weekend by saying 'we did it!'. It seems a bit unfair as a supporter to use the collective 'we' as the players did all the hard work and training, so therefore they should take all the credit.

Melbourne is also a much more culturally diverse city than Brisbane and I think Identifying with your local AFL club helps foster a sense of community regardless of your background. I reluctantly admit that's a good thing even if it a perceived solidarity rather than an actual one. From what I read about Queensland's new Premier Campbell Newman cutting initiatives like The Premier's Literary Awards and even The School Band Competition, then I don't think this sense of division between the sporting and arts communities will dispel anytime soon in Queensland.

There's an old man that sits outside the house across the road from ours. We wave at each other regularly and talk occasionally. I find him hard to understand as he's from another country (I think he's from Turkey, but I may have just misheard him).

One of the first things he ever asked me was where I was from. I sheepishly answered 'Brisbane'. He said that I misunderstood and he wanted to know where my ancestors were from. It occurred to me that I had never really considered this and I felt strangely embarrassed when I said 'I suppose my background is English and Irish'. I felt like a loaf of white bread as I stood on the pavement talking to the man. I sensed the man had a lot of national pride in his homeland, even if I haven't yet figured out exactly where that homeland is.

I could hear the sound of mowers in the background.

It must feel good to belong.