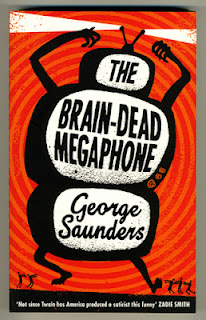 Sometimes it can be fun to travel down the rabbit hole.

I was listening to Marc Maron's WTF podcast a while ago and one of the guests was actor Michael Cera. I'm not a massive fan, but he was talking about his favourite books and I noted that we had similar tastes in post World War II American authors and essayists. One writer he mentioned that I hadn't heard of before was George Saunders. I couldn't resist checking out his collection of non-fiction essays - especially with a title like 'The Brain-Dead Megaphone'.

Saunders is a an amiable writer and has a great sense of humour. He's not as self-effacing as someone like David Sedaris, but then he wasn't blessed (or cursed) with the same bizarre family life. Saunders has a more 'journalistic' eye and is a little more outward-looking. His stories can mostly be divided into two camps: The personal and political.

The title story 'The Brain-Dead Megaphone' is a particularly scathing political summation of the effect the media has on (to borrow a Noam Chomsky term) 'manufacturing consent'. It posits the scenario where media discourse is like a party. There are several groups having perfectly reasonable low key discussions. Suddenly, someone bursts into the room speaking through a megaphone - It doesn't matter how boorish or enlightened the words coming from the megaphone are, because everyone's conversations will suddenly be attuned to that discussion. Saunders suggests this is how nations become involved in wars like the one in Iraq, because the megaphone proclaimed a blatant lie to be the truth. What ever happened to those weapons of mass destruction?

This story was written a few years ago and I wonder if Saunders could revise this story somewhat. My own cynical opinion is that with media fragmentation, internet pay walls, the demise of broadsheet journalism and the News of the World scandal that the volume of the megaphone seems to have been turned down. Soon governments will not need popular consent before embarking on some hostile venture, because less people will be interested in political discourse and instead be checking their Buzzfeed to see whether Kim Kardashian has had bum implants or not.

Saunders' views are left-wing but at his core he's more of a humanist. In a story about border protection on the Mexican-US border, 'The Great Divider', he spends time with law enforcement, vigilantes and Mexican illegal-aliens and manages to humanise all parties involved, while pointing out the futility and ridiculousness of trying to enforce an often imaginary divide.

Similarly, in a story about the city of Dubai, 'The New Mecca', Saunders is self-aware enough to accept that it is something of a jounalistic cliche to be looking for a negative spin on a city where there is a massive rich and poor divide and he is surrounded by such opulence. He ponders his own hypocrisy, while contemplating a man who is thrilled to have a much-coveted job of cleaning windows at a hotel who earns as much in a year as Saunders was paid to write his travel story.

Saunders seems to be especially enthusiastic when discussing other writers. I was happy to note that he held one of my other favourite writers Kurt Vonnegut in high regard. In 'Mr Vonnegut in Sumatra', Saunders discusses how Vonnegut could be more truthful and personal about the brutality of war by delivering his stories in the form of fiction rather than non-fiction.

One of his most personal and touching stories, 'Thank You Esther Forbes', involved Saunders' love of the book 'Johnny Tremain'. He was given this book as a child by a teacher he had a crush on. Tragically, his affections would never be reciprocated - She was a nun! It all ended happily, however, when Sister Lynette unwittingly began Saunders' love affair with literature. Thanks sister!

In 'The United States of Huck', Saunders discusses his divided feelings about 'Huckleberry Finn'. Saunders considers it an American classic, but has some qualms with the overt racism in the book, as well as an unsatisfying ending that relies too much on coincidence. Ever the diplomat, Saunders rationalises Mark Twain's racism by putting it in the context of the time and explaining that Twain's views were quite progressive - especially considering Twain was the son of a slave-owner.

Saunders didn't convince me to want to read Huckleberry Finn. It seems just too embedded in the public consciousness to be able to be read from a fresh perspective. His comparison of post modern short story writer Donald Barthelme's 'The School' against the classic narrative structure, 'The Perfect Gerbil', made me actually want to read Barthelme's work, which otherwise would have left me confused and dismissive if I hadn't read Saunders' interpretation. I've managed to get a copy of Barthelme's collection 'Forty Stories' so that will be a further trip down the rabbit hole (thanks Michael Cera).

The penultimate story in 'The Brain-Dead Megaphone' is called 'The Buddha'. It touches on something that Saunders seems reticent to discuss - spirituality. In the story he flies to Katmandu to investigate a supposed 'miracle' where a boy has sat under a tree meditating for seven months without drinking or eating. I found this story especially touching as Saunders opens up about some of his own fears, such as the realisation of the love for his wife and the finite time they have together, as well as his daughter's well-being following a recent car crash.

Saunders does not strike me as the religious type, but this vulnerability he establishes helps to contextualise what happens in the story. Saunders spends an excruciating night in Katmandu which is apparently the coldest in 70 years. His objective is to stay awake and find out if the boy is secretly being fed at night. During the entire vigil, Saunders is moving about feverishly to keep warm and is suffering from sleep deprivation, but the boy does not move an inch! In his sleep-deprived state, Saunders believes he sees lights emanating from the boy, which leads him to consider the nature of miracles. Ultimately he is unable to uncover if the boy is perpetrating a hoax or not, but appreciates the power the boy has as a symbol of hope.

The final story is a fitting counter-balance to 'The Brain-Dead Megaphone' which is called 'Manifesto: A Press Release from PRKA'. Kurt Vonnegut would approve of this story. It basically entails listing what PRKA - People Reluctant to Kill for an Abstraction - failed to do today: Torture people, blow themselves up taking innocent civilians with them, fly planes into buildings, set landmines or harbor feelings of hatred. Sounds like a good day's work in my opinion!

In short, these stories are the ramblings of a sane and reasonable human being, which is always a refreshing thing to read. Saunders has managed to make me a little paranoid, though. Am I also contributing to the brain-dead megaphone by writing this? Please don't ignore me - I'm not asking for your compliance to commit global atrocities - I just want you to read a book... Now please excuse me - I'm off to check my Buzzfeed! 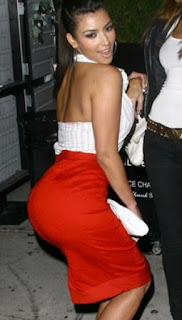