I'm not a very politically motivated person. As such, I tend to notice things that annoy me about politicians rather than their achievements. The first time I remember being truly flabbergasted by a politician  was during The Fitzgerald Inquiry into corruption in Brisbane in the late 1980s. Under oath former Premier of Queensland Joh Bjleke-Petersen was asked whether he understood The Separation of Powers under The Westminster System.

Clearly he didn't. But instead of saying 'I don't know' or 'I'm not sure', he instead stalled for time with his patented double speak until someone finally explained it.

The Separation of Powers under the Westminster System basically means that the branches of legislature, executive and judiciary must act separately and not be allowed to encroach on each other. It's a pity Sir Joh apparently didn't understand this because it is exactly what his government were being accused of breaching.

As part of my job I have to listen to a lot of political commentary and it amazes me how difficult it is for politicians to answer a question directly. One of the great question-avoiders in interviews I encountered before she became PM was Julia Gillard. She would always turn questions back to the official party line rather than risk drifting off topic and making a controversial statement, especially when it came to rumours of a leadership spill.

Maybe this skill to confound rather than enlighten is something that has helped politicians such as Sir Joh and Julia Gillard (strange that they are at polar ends of politics) gain power. I can't blame Ms Gillard in a way, because when she went to the last election with a promise not to introduce a carbon tax she was labelled a 'liar' when Labor introduced one. No politician wants that!

This week Federal Coalition Leader Tony Abbott accused the carbon tax of being a reason why BHP pulled out off the Olympic Dam project before admitting on national TV that he had not even read the report. Later he retracted this statement. I'm still unsure whether he has read it or not but it does undermine his claim to be able to have an informed opinion on this issue. Here Abbott admitted he 'didn't know' which is to his credit I suppose, but his shrugging 'aw shucks - you caught me out' persona following his gaff and subsequent spin was equally annoying.

It seems that all political commentary is spin these days and having to listen to it can be very frustrating. I often feel as frustrated as this British interviewer Jeremy Paxman ,who asked the same question 'Did you threaten to overrule him?' a dozen times in this brief interview with conservative politician Michael Howard and still didn't get a straight answer.

Paxman later admitted that he asked the question so many times because his producer told him to pad out the time, but maybe Paxman himself was doing a little political spin, because no politician would dare come on the show in future if they thought they would be bullied.

Bolt further undermined listeners by refusing to engage in any debates that go beyond the confines of climate change into other issues he sees as tangential such as pollution, population growth and economics. To me the climate change debate is linked to all these issues and ties into the one fundamental question: What kind of world do you want to live in? 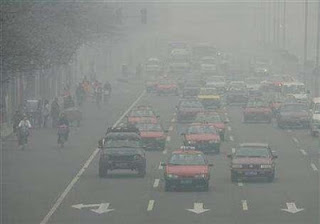 This question unfortunately goes beyond the grasp of politics. I'm no scientician, but I'm able to make my own assessment of the world through my own stray observations. Surely stopping factories spewing smoke into the atmosphere, people dying from poisoned water and ever-encrochaing desert and populations wearing gas masks to stop from choking to death in major urban centres is a good thing? To (mis)quote a popular climate change scientist, I believe that 'even if climate change doesn't exist then by acting to stop pollution we would have simply made the world a better place for no good reason'

I think political parties seem to have their priorities wrong these days. They seem to be too concerned with winning leadership challenges, opinion polls and on-air political debates and forming policies on-the-run to appeal to the most constituents before lastly trying to justify these policies with the party's political ideology. In my opinion, they should start with their ideologies and build from there.

Sometimes ideologies are more important than politics but we do live in a cynical age where it's not popular to be ideological. To me Labor's Peter Garrett represented something more important as the singer from Midnight Oil than he does as Federal Minister for Education. Anybody can tow the Labor-Party line, but as an agitator in Midnight Oil he stood for something beyond political muck-raking and was free to speak his mind. He's gone from being Batman to settling for Commissioner Gordon.

We are all subjected to so much information these days and it seems everyone (including myself) is an armchair expert. Perhaps all 20-million plus of us need to admit that we simply 'don't know' and try and think less about 'what's in it for me?' and more about 'what is right'.