The first car I owned was a 1981 Toyota Corona station wagon. It didn't help at all in cementing my now-legendary 'tough guy and ladies' man' status, but the feeling of freedom and possible escape it provided was priceless. The drawback when you're young, obviously, is that the guy with the car ends up being everybody's taxi service. As most of my friends were poor university students at the time and had no money, I had to devise a non-monetary way to make people pay for their rides.

The Toyota only had a cassette-radio player so I made several tapes to make passengers uncomfortable during the journey (depending on the person), which included a cassette of all my favourite novelty songs that I would play to any grunge or heavy metal-leaning passengers and possibly the most offensive album ever recorded Derek and Clive's 'Ad Nauseam', which I would get a great kick out of playing to people I decided had 'delicate sensibilities'. 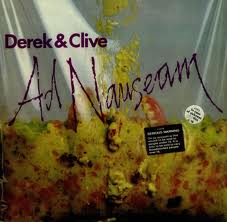 Derek and Clive are the brain-dead alter-egos of 60s comedians, satirists and television stars Peter Cook and Dudley Moore. They recorded three albums in the mid-to-late 70s with Ad-Nauseam being the last in the series which was recorded in 1978. It is possibly the most racist, misogynistic, blasphemous, hate-filled and vulgar thing ever recorded by two mainstream celebrities... but I like it!

I admire it for being so completely audacious and lacking in any concern for how it would affect their careers and well-respected public personas. I find the record's shock value is useful in getting you out of the loop of self involvement and naval gazing, in the same way as a sudden massively-loud power chord might - or else a punch to the face. The timing was perfect for this record as well, as it is probably the late 70s comedic equivalent of punk rock. Underneath all the smut, however, there is a certain cleverness to the record.

To me Derek and Clive is a great satire of the sort of blow-hard drunkards you could find in almost any pub throughout the world. Full of ridiculous made-up tales and opinions these men might spout to shock and get attention. More than likely you might smile and nod at them instead of taking them to task, because you know they have nothing else going on in their dull little lives. If you take Derek and Clive as social satire, than you can let them get away with saying anything because you're not laughing with them - you're laughing at them.

The three Derek and Clive records are completely ad-libbed and I always love how Peter Cook tries to find the most outrageous and shocking thing to say to make Dudley Moore crack-up. Dudley's laughs are a strange mixture of exasperated, nervous, admiring and giddy and whenever he can get a word in edgewise he can more than hold his own against Cook's constant barrage of offensiveness.

Moore really shines on Ad-Nauseam during the extended rant 'The Horn' in which Derek and Clive list all the things which give them an erection (which is basically everything). Moore takes proceedings in an unexpected direction when he suddenly laments that everything gives him the horn... except his wife Valerie. The sketch ends when Moore suddenly realises that Jesus doesn't give him the horn either so therefore his wife must be Jesus. There you go folks - something to offend everyone!

I like Derek and Clive, but it annoys me that this is almost the only thing the Peter Cook and Dudley Moore partnership is remembered for these days. It's not hard to track down copies of the Derek and Clive albums, but if you want to watch the excellent sketch comedy show from the 1960s 'Not Only... But Also...' then there is only one DVD of material you can buy called 'Not Only... But Also... The Best of... What's Left of...'. The BBC in their infinite wisdom taped over the majority of the episodes even though they were wildly popular and featured historically significant guests such as John Lennon. 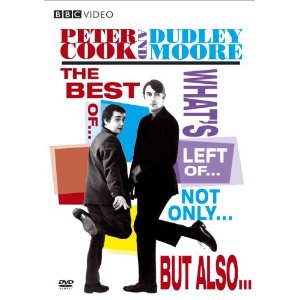 Originally the show was to be a vehicle for Dudley Moore's music (he was an accomplished jazz pianist), but Moore decided to call his old friend Peter Cook in to write some sketches. It turned out they were a perfect yin and yang. Cook was aloof, Moore was friendly and charming. Cook was educated at Cambridge, Moore was working class. The show ended up being a blueprint for sketch comedy that has continued to this day and still seems surprisingly fresh.

To my mind, Moore and Cook's careers separately following this show were both a string of missed opportunities. As a duo they could never find the right film project. The most famous was probably Bedazzled which probably led to them going separate ways. Solo they never really had the same cultural impact as they did when working together. Sure, Moore appeared in a few smash-hit Hollywood films with the most famous being his role in 'Arthur', but he spent most of the 80s and 90s featuring in less-than-inspiring or ground-breaking comedies.

Similarly, Cook without Moore was possibly seen as too 'cerebral' resulting in Cook never finding the right outlet in the mass-market to become a cross-over success. Apparently he was also something of an alcoholic and recluse, which certainly didn't help his public persona. Sadly, Cook died from complications of alcoholism in 1995 and Moore died of a degenerative brian disease in 2002.

Besides guest spots on shows like Black Adder, Cook really didn't appear on too many Australian television sets in the 1980s and 90s. I recently downloaded what might have been the final thing he did before he died titled 'Why Bother?'. It features one of Cook's most famous characters Sir Arthur Streeb-Greebling pondering his life and being interviewed by another cerebral and talented-yet-overlooked satirist Chris Morris. One particularly memorable sketch is Sir Arthur discussing selling the rights to a recently-resurrected Jesus to the Honda motor company. When I first heard this sketch I remember thinking 'good on ya Pete - blasphemous to the end!'

Derek and Clive would approve.

Here is my favourite sketch from 'Not Only... But Also...'. It's a perfect example of their chemistry and a great satire of the stuffiness of the English public school system. Buy the DVD!