The Making of 'The Shining' 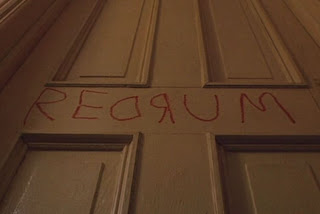 I consider myself a bit of a film buff, but I don't really collect films like some people. Once I've watched a film I consider it 'watched' and don't need to revisit it for a number of years - even if it's great. There are some exceptions to this rule and I tend to buy films by directors I admire - not because of the films themselves, but rather the bonus features.

I suppose I started getting into bonus features around the time of the 'Alien: Quadrilogy' box-set. I still feel a twinge of guilt for buying it as a present for my wife. Aliens was always one of her favourite films and the box set came with about 80 hours of bonus features. I watched them all! I don't think she watched any of them... Whoops!

After watching 'The Making of Alien' I realised what I truly love about a good 'making of'. It's the age-old story of triumph in the face of adversity where collaboration, intelligence and creativity combined with a singular vision win out against time constraints, a limited budget and men in suits.

My favourite scene in 'The Making of Alien' involves director Ridley Scott examining a massive model of the spaceship 'Nostromo', which model-makers had been labouring over for days. He decided he didn't like it and ripped the front section off the spaceship in front of horrified onlookers. This is the version of the ship that audiences see in the film!

Those pre-digital bonus features are the most exciting for me because I find it easier to get emotionally involved with a crew that have laboured lovingly over an intricate model to reach an impossible deadline (before seeing it blown-up!), than feeling empathy for a computer programmer who has endlessly typed in hours of code to achieve a less-spectacular effect. I realise both have their places in film, but I prefer modern directors such as Peter Jackson and Christopher Nolan who can tastefully combine both.

A lot of bonus features tend to focus on the technical aspects of making a film, but one making-of that is unique is 'The Making of The Shining' as it focusses on how director Stanley Kubrick managed to get performances out of his cast. The other thing that makes it unique is it was directed by Kubrick's daughter Vivian.

Vivian Kubrick was 17 at the time she made the film and it is quite interesting that the one person she doesn't seem to have access to as a subject is her father. This may be because he was busy directing the film, or else trying to maintain his enigmatic facade. Apparently, Vivian and her father were quite close at this point, so it could be seen as a commercial decision rather than a personal one.

Vivian Kubrick was much better at disarming the rest of the cast of the movie and managed to get some frank and personal anecdotes from all major cast members, as well as giving an insight to the atmosphere on the set.

The film starts with Vivian's camera focussed on Jack Nicholson who is kidding around and showing how he prepares for a scene. This includes brushing his teeth and going to the toilet. Vivian's camera follows Nicholson to the set, which is revealed to be a bedroom in The Overlook Hotel. Nicholson works himself into a rabid frenzy, grabs an axe and bashes down the bathroom door. We have just witnessed one of films most iconic moments captured from a different perspective. The contrast between the mundane and the horrific works particularly well.

The overwhelming feeling expressed from all interview subjects was 'gratitude' that they were chosen to work on the project, but they all seemed to have been treated very differently by Stanley Kubrick. Actor Scatman Crothers who plays Dick Halloran even cries during his interview! I think this is probably because Crothers was happy to be involved in such a major project late in his career, when he came from a vaudevillian background and must have been working sporadically. 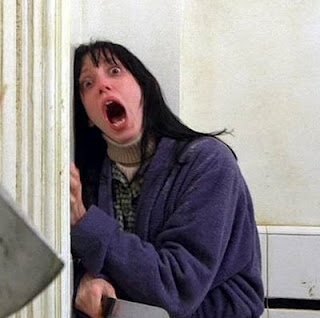 Actor Shelley Duvall who plays Wendy Torrance is a different story. She was a physical and emotional wreck on the set and most of it seemed to be due to Stanley Kubrick degrading and chastising her when she would miss her mark or suggest other ways she might tackle a scene. It's true that Duvall seems to be a bit highly strung, but footage of her curled up in a corner or complaining of her hair falling out due to stress was a bit shocking to see on a professional film set.

Duvall is a good sport, though and admits in hindsight that Kubrick did a good job in getting a 'hysterical' performance out of her and even goes so far as to say she learned more on this picture than she did from working on all her other films combined. Seeing the results on screen, I tend to agree - whether Kubrick's debasement of Duvall was calculated or not.

Nicholson is an interesting interview and I think he was trying to be quite diplomatic about his involvement with the film. Certainly both he and Kubrick are both strong alpha-male types and I think Stanley tried to give Nicholson some space and not direct him as much as Duvall. Nicholson would have been hired because he can play 'manic' with his eyes closed and I think he feels a bit weary with this typecasting and celebrity in general. Nicholson states in the interview that he will try to have ideas for a character in a scene but will in the end usually succumb to the director's vision, because it is more challenging as an actor. Whether this means he was getting too much direction or not enough is anyone's guess.

Nicholson also says that a celebrity meets ten times more people in a year than the average person meets in a lifetime. This is followed by a scene of a tedious meet-and-greet where Nicholson shakes hands with an endless barrage of set visitors and hanger-ons.

This scene is contrasted with a great interview with child-actor Danny Lloyd, who is surprised and delighted that he is earning money from the film and he says enjoyed his time on the set. Kubrick took more of a 'teacher' approach when directing Lloyd and seemed to leave the job of keeping Lloyd's spirits up to the assistant director. Lloyd admitted to getting a bit of ribbing from his friends at school who accused him of thinking he was 'smart'. Lloyd considers this statement and confidently declares 'I am smart!' Like the rest of the cast Kubrick assembled - Lloyd was exactly right for the role.

Stanley Kubrick is often criticised for being clinical and his films lacking emotion, but I think 'The Making of The Shining' shows how he had a great focus on performance. Perhaps his razor-like perception in setting up a shot extended to his eye for personality. Kubrick certainly is an auteur and would have overseen all aspects of production which gives his films a unique feel. Personally, I think they do look sparse and clinical, but they do so in a way that results in an oddly emotional response. The closest musical example I can think of is when I hear the Laurie Anderson song 'O Superman'. They both have a unique emotional landscape.

Making any film is difficult and it is amazing the amount of skill and energy that is required to make a bad film - let alone a classic! While watching 'The Making of The Shining' I'm amazed at the amount of self-belief and vision Kubrick must have had to survive in such a nebulous career. His major on-screen contribution to 'The Making of The Shining' seems to be sitting behind a typewriter looking calm whilst endlessly re-writing the script and surrounded by a sea of chaos. It occurs to me that Stanley is something of a caretaker...

He's always been the caretaker!