Success in the literary world is difficult to achieve in this time of fragmented media outlets and declining sales of broadsheet newspapers, but luckily I had success early on in my career when the newspaper industry was thriving.

When I was nine I had a story printed in the kids' section of The Courier Mail which was at the time the largest circulating newspaper in Brisbane.

The story was called 'The Beginning of Life On The Moon' - It was a bold, provocative piece of writing foreshadowing the development of a self-contained colony on the moon and describing in intricate detail how this might come about. 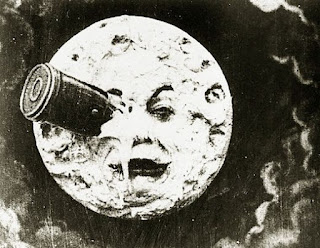 Like all good works of science fiction, my story built on the work of the great predecessors. The most obvious influence is Jules Verne's masterpiece 'From the Earth to the Moon', however, considering my story was written in 1980, filmic influences such as George Lucas' 'Star Wars' and especially Stanley Kubrick's '2001: A Space Odyssey' can not be ruled out.

Upon its publication the story had some detractors - especially in the schoolyard - who were jealous of my literary ambitions and success. There was the occasional dead-arm to contend with and some criticism about technical terms in the story such as 'forward pitch thrusters', but aside from that I was mostly revered from a distance with a quiet sense of awe.

It's an unfortunate flaw in my personality that whenever I encounter success in a field, I tend to rest on my laurels rather than capitalise on that success. My story was the first instance I remember of this happening - I haven't written a story as successful since. The most tragic part is I never even cashed the cheque I received for the story. I think that mostly had to do with the fact that I didn't have a bank account at the time and the amount was less than one dollar.

Although 'The Beginning of Life On The Moon' easily stands beside the great auteurs such as Verne, Lucas and Kubrick, I believe I am more like Orson Welles in that I'm a boy genius constantly living in the shadow of my early success and never being able to match its majesty and cultural impact. Welles had 'Citizen Kane' and I have 'The Beginning of Life On The Moon'.

The story was so ahead of its time that I believe the technology to bring my vision to the screen has only really caught up now. Digital advances made in films such as 'Avatar' and 'Lord of the Rings' now provide a big enough canvas to match the breadth of my imagination.

With this in mind, dear reader, I beg you to consider the story below and help my campaign to bring this work of genius to the big screen. Let the nine year-old Trevor live again....