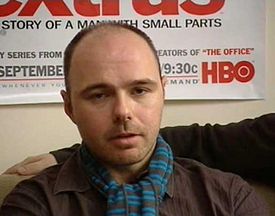 Karl Pilkington is probably best know these days as the star of An Idiot Abroad and The Ricky Gervais Show animated series. I first heard about him several years ago as one third of The Ricky Gervais Show podcast, which, for the uninitiated is basically a series of amusing but rambling conversations between friends.

I heard the podcast on a long drive from Melbourne to Sydney. The episode that got me hooked was in season five and featured Ricky Gervais devising a scenario for Karl where his family would be killed if he didn't marry either a monkey or a gay man named Graeme.

Karl was smart enough to know that he didn't want to appear homophobic in front any gay listeners but also didn't want to get any ribbing from his mates down the pub. He cleverly avoided the answer by saying that Graeme wasn't really his type and would instead ask Graeme if he'd seen any monkeys around.

After that road trip I quickly downloaded the previous series and all the subsequent 'Guide to' podcasts as well as 'XFM: From the Vault' compilations (the initial podcasts were a spinoff of Ricky Gervais and Stephen Merchant's radio show in which Karl was the downtrodden producer). I would listen to these podcasts while jogging on the weekends. Some of Karl's remarks often made me burst out laughing especially when Gervais would extrapolate some of Karl's mystical beliefs to their illogical conclusions. It must have been a strange sight to see someone running and then suddenly fitfully laughing. Running is normally such a sombre pursuit.

The thing that continually makes the podcasts interesting is wondering how the dynamic of the show works and how much Karl is 'in on the joke'. Ricky Gervais assumes the role of 'the bully' (a role he seems to be increasingly prone to accept) and Karl is 'the victim'. Stephen Merchant takes on the role of mediator but both he and Gervais will more likely gang up against Pilkington with science and facts rather than let Karl get away with his poorly researched internet stories and hearsay.

From my many hours of listening I have devised this much about the show:

- Gervais and Merchant seem to be the ones who come up with material to ask Karl about every week. Karl works on his segments which are either Monkey News, Rockbusters or his diary. Early on they were not allowed to meet during the week to discuss the show but I suspect they have a brief production meeting. They do not rehearse the show as such.

- Karl never backs down from an argument no matter how ridiculous and he never laughs. This appears to be a rule because Karl sounded disappointed one time when he was caught out laughing. I don't think Karl is a defined 'character' and most of his thoughts seem to be genuine and spontaneous.

An example of Gervais dismissing a story can be found in Karl's 'Monkey News' segment. Karl mentioned that he had read on the internet that a monkey brain had been kept alive on 'a stick'. Gervais mocked him for this and said it was impossible. Recently while watching Doctor Michael Molesley's 'Make Me Live Forever' documentary there was a clip of an experiment from the early 1970s in which Doctor Robert White managed to transplant a monkey head onto the torso of another monkey's body. It occurred to me that this is what Karl had probably seen. Gervais, being a former biology student would most likely have been aware of this experiment but refused to give Karl any credit. (BTW if you don't believe me the clip is on Youtube, but I warn you that once you see it you'll never be able to 'unsee' it.) 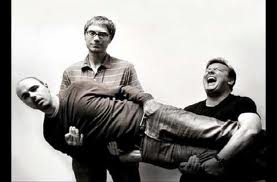 I'm a fan of the podcasts more than the animated series probably because I've envisioned Karl's stories in my own mind and often prefer my take on things - but occasionally the animation really adds something to Karl's ramblings. One example in the last series is the show in which Pilkington recounted an actual meeting with some film producers in which he pitched a ridiculous premise for a film which he envisioned would star Clive Warren (Karl meant to say Clive Owen) and involved some weird lesbian brain scenario. The animated embodiment of 'Clive Warren' and the subsequent movie segments were both hysterical. 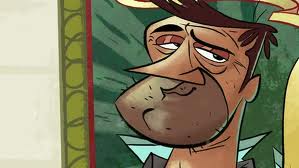 I'm also a big fan of An Idiot Abroad because it makes me realise how much Karl and I have in common. Unlike most travel shows Karl is prone to pointing out what is wrong with a certain destination rather than what is great about it. Examples of this include his visit to the pyramids where he became fixated on all the garbage blowing about in the breeze rather than the pyramids themselves. Also his swim in the Dead Sea was marred when he encountered someone else's snot in the water. Watching this reminded me of postcards I sent back to relatives when I travelled through Europe noting that 'Big Ben isn't that big' and a visit to Disneyland where I remarked that The Magic Castle looks like it's made out of plywood. Perhaps television has conditioned us to expect more out of travelling than reality can possibly deliver.
One problem with An Idiot Abroad is that you realise Karl is more 'in on the joke' than the podcasts would have you believe. There is no way that Karl could be abducted in a training scenario without having some foreknowledge about what is going to happen. The same with his prostate exam in the second series. He would have to give his consent for something so private to be broadcast on national television. Also, the fact that he consented to a second series (and possibly a third) would indicate that he's not as unwilling a participant as you might expect. Karl is nothing but practical, however, and points out that he needs some form of employment.
Ultimately, the thing that is great about Karl is that he has had very little formal education but is always questioning - even if it is a stupid question like 'Jellyfish - Do we need them?'. He's interested in things even if he doesn't quite understand them. He's like that kid in school who puts up his hand and is derided by his classmates for asking a stupid question but secretly everyone in the class was just too afraid to ask. I admire people who aren't afraid to look stupid.
I love Karl but if it was up to me to decide whether to marry a chimp or Karl Pilkington then I would probably choose the chimp - but only just. Looking at some of his photos maybe there wouldn't be too much difference between the two of them but at least the chimp doesn't have a 'head like a fucking orange'.
Posted by Trevor Ludlow at 22:52