500 Episodes of The Simpsons

What can be said about The Simpsons that hasn't already been said, eh? That's my challenge writing this blog but also a challenge for the show's writers having to come up with a new series every year.

I've been watching the show from the beginning and I remember not being an instant fan. I'd seen a few of the shorts from The Tracey Ullman Show and thought it was okay, but when the show became a half-hour fully-fledged series it wasn't really given the promotion it deserved. 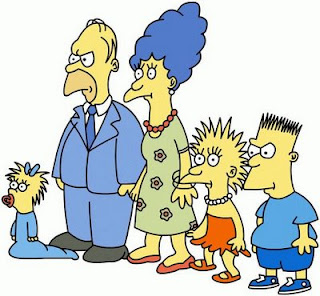 The advertisers seemed to think that because the show was a cartoon the audience would most likely comprise children, so they focussed on the antics of Bart Simpson and released the woeful late 80s synth-pop number 'Do The Bartman' as a tie-in to the series premier. A lot of merchandise was released also featuring Bart and his incongruous catch phrases such as 'Eat My Shorts' and 'Don't Have a Cow, Man'. These were quickly phased out in the show and Bart's early penchant for catch phrases was openly derided in the  'I Didn't Do It' episode some years later.

I really fell in love with the show when living in a sharehouse with about five other people. We'd watch the new episode every week and had an extensive VHS library of past episodes to tide us over until new episodes were aired. There was nothing better than sitting down with a couple of slices of pepperoni pizza from Ribbets at Auchenflower and a four litre cask of lambrusco.

After watching the show with others it was obvious who the star of the show was - Homer. His unbridled rampaging Id combined with his laziness and his lack of concern for others represented the worst aspects of 'the ugly American' but there was something about him that was sweet and childlike too. In spite of early criticism the show received from detractors, The Simpsons, although dysfunctional, proved to be a pretty solid family unit that loved each other and were more easy to relate to than families on shows like Growing Pains and Family Ties which were so formulaic and saccharine. President George Bush Senior famously said that Americans should be 'more like The Waltons and less like the Simpsons'. He would go on to be lampooned in the show as a Mr Wilson-type character that moves in over the road from Bart's 'Dennis the Menace.'

Simpson-speak became an instant part of our vernacular. This, combined with quotes from 70s Australian television shows, sporting commentators and archaic dad-speak made conversations between me and my friends almost indecipherable to the outsider for the best part of a decade (I think I've recovered to some degree now). But that was the thing - if you could drop a Simpsons quote into a conversation and get a response then you knew the person you were talking to was in a group that was as important and exclusive as The Stonecutters. On one occasion this didn't work in a friends' favour. I remember the look of disappointment on the face of his girlfriend who was not familiar with the show when she realised all the witty remarks that my friend was spouting were all lifted from The Simpsons. The show travelled so much comedic terrain that there was no subject the show didn't touch. Even South Park acknowledged this in the episode 'The Simpsons Already Did It'. 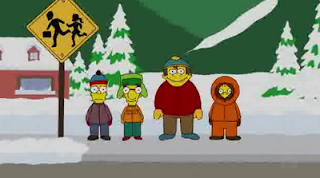 To my mind there are three Simpsons eras. Early episodes focussed on the dynamic of the family when the show looked and sounded more like a deranged Peanuts cartoon. When writers ran out of these family scenarios the show shifted into being about social satire and popular culture. Now the Simpsons' universe is so large that they seem to be able to sustain storylines from their own rich past. This makes it strange when watching new episodes because any guest stars seem to be shoehorned in. The show no longer seems to be a part of this world.

Another way to divide the series up would be to consider episodes to be Phil Hartman episodes or post Phil Hartman. I remember being genuinely shocked and saddened when Hartman was murdered by his wife in 1998 as he seemed such a well adjusted guy and was effortlessly funny. He most notably played attorney Lionel Hutz and washed up actor Troy McLure in The Simpsons and left a gaping hole in the series when he passed away. To their credit, The Simpsons' writers did not replace Hartman with another voice actor but his loss is still felt. Hartman's performance in the musical version of 'Planet of the Apes' is still one of the series highlights and a reminder of when songs in The Simpsons were worthwhile. The 'Songs in the Key of Springfield' album is pretty great but the tunes went downhill after that for some reason. If you're a Hartman fan I also recommend his performance in the role of Captain Carl in Pee Wee Herman live.

Like any Simpsons fan I have my favourite Simpsons moments. I like it when the show gets a little bit surreal and characters act against-type and unexpectedly. Although not particularly funny, one of my favourite clips is when Marge is on the front lawn of the house with sisters Patty and Selma. They have been fighting with Homer. Marge tries to placate her sisters by explaining that Homer is 'a complicated man'. Seconds later Homer sticks his head out of an upstairs window, smashes a plate over his head and exclaims 'No I'm not!'
If I had to pick a low point of the series it would have to be the episode 'That 90s Show' which came out in 2008. The show reimagines the Simpsons' timeline so that Homer and Marge are college-age in the 1990s. Besides some pretty lame references to Nirvana and shows like Melrose Place the biggest deal breaker is the fact that they could have been a bit more imaginative and true to The Simpsons timeline by at least making it a dream sequence. Does this mean that Marge never picked Homer up after a humiliating high school prom or that they never unknowingly met at summer camp when they were children? Even the episode where Principal Skinner was found to be an imposter named Armin Tamzarian was reset at the end when they made Springfielders swear they would never mention Skinner's real identity again 'under pain of torture'.
I suppose this episode made me tune out of the show for a while but I started watching it again. Luckily the writers seem to have learned from the mistake of messing with the timeline. There are still talented people working on the show and over the years Conan O'Brien has featured among the writing staff and Brad Bird has been one of the notable directors that has gone on to do feature films such as The Incredibles and Mission Impossible: Ghost Protocol. It's undoubtedly a great pool of talent and amazing to think it has lasted this long. When I watch it now it is kind of like watching a modern Rolling Stones concert. Sure, it's not their heyday anymore but I'm still interested in what they're up to and something that has had such a profound impact on popular culture deserves a lifetime pass in my book.
So if a nuclear bomb suddenly lands on me one day and I have a split second left to live, I won't be like Comic Book Guy and declare that I've 'wasted my life' - on the contrary - I've spent a large portion of it watching The Simpsons! 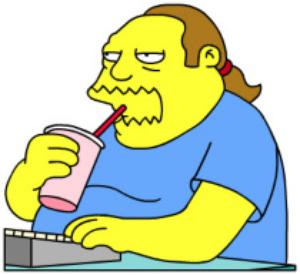