I don't get to claim intellectual superiority very often, but there's a movie out in cinemas at the moment for which I have read the book before seeing the movie. Unfortunately, after having read the book, I don't think I'll bother with the film, even though the trailer makes the film look breathtakingly beautiful.

The movie in question is 'Life of Pi'. It's directed by Academy Award winner Ang Lee. I consider myself a champion of his work - even his less popular films. I liked his version of 'The Hulk'. I found 'Life of Pi' to be a relatively good little adventure story, but the thing that ruined the book for me was the way it was framed. I won't give the ending away, but there is a cheap twist you would expect from M. Night Shyamalan (who I believe wanted to direct this film at some point), which is dressed up as some sort of deep spiritual revelation.

I think the ending would only be a revelation to people who think 'Noah's Ark' and a bunch of other bible stories actually happened. The rest of the audience will be going 'well, derrr!'

I'm interested to see if this will be the case, because this aspect of the plot is not alluded to in the film's trailers and for all accounts they'll probably think the movie is a high seas adventure about a boy and his tiger. I suppose, for the most part, that's what it is.

It's a delicate balance in a trailer between getting the audience's interest and giving away too much. Personally, I try and find out as much as I can about a film I'm interested in before seeing it and will go so far as to even read the script if it's leaked online. I don't think a movie can be ruined by giving away a single plot point, and if it can, then it's probably not the sort of film I'd like to see.

Admittedly, it's a good feeling to discover a secret along with an audience, but this rarely happens in the internet age. I remember being genuinely surprised in cinemas during the film 'From Dusk 'til Dawn', which I saw because it was produced by Quentin Tarantino. I thought it would be a good little gangster flick - which it was - but when Selma Hayek turned into a vampire half way through the film (switching the film's genre in a split second), the collective laugh and groan from the audience was worth the ticket price alone.

This is a good surprise rather than a bad surprise. When I think back to all the movie trailers I've seen over the years, it occurs to me that warning signs can often be found in trailers indicating that the film won't be that good.


The most obvious example I can think of is the Robin Williams film 'Toys'. The trailer features Williams in a field ad-libbing about the film without ever saying what it's about, or showing any footage from the film. His biggest selling point is that 'it's by the guy who made Rain Man'. If you've ever seen the movie, you'll know that it's a pretty joyless film that bizarrely seems to deal with the consequences of excessive military build up and completely ignores the joy and whimsy of childhood. Under no circumstances should you mistake this film for Toy Story!

The trailer for the movie version of 'The Hitch Hiker's Guide to the Galaxy' has one really odd shot that I'm almost certain was not in the film. Zaphod Beeblebrox (Sam Rockwell) explains to Arthur Dent (Martin Freeman) that he and Ford Prefect share two of the same mothers. At this point Freeman breaks the fourth wall and stares directly at the audience as if to say 'can you believe these guys?' It's ramming home the punchline of a not particularly funny joke. The real appeal of the jokes in the Hitchhiker's books was the language and riffing on the absurdity of the universe through some high concept jokes. This trailer made it look like the jokes had been dumbed down for a mass audience. Unfortunately, this turned out to be the case.

The problem with making movies at the moment is it's really hard to make money when people don't go to cinemas and everybody is pirating movies. This means films have to appeal to as wide an audience as possible, which means that almost nobody is truly satisfied with the end results. I'm sure there would be a better quality of films out there if audiences simply came to the same revelation that I did a while ago and realised that you don't have to 'get' everything. I have almost no idea what most of my favourite films are about. There are obviously some points that I can grasp, but I prefer a puzzle I can ponder, rather than be handed everything in a self-congratulatory manner. Also, it's comforting to know that there are people out there who are smarter than me - or at the very least craftier.


Last year Terrence Malick released the film 'Tree of Life' starring Brad Pitt. I believe the trailer was fairly accurate in depicting the tone of the film, but that didn't stop audiences in the US complaining that they didn't understand the film and wanted their money back. This lead many cinemas to advertise that the film had a 'non-linear narrative'. I would argue that audiences dumb enough to go see a Terrence Malick film expecting to see Pitt's rock-hard abs and gunplay instead of whispered internal monologues and sweeping vistas of nature, probably wouldn't know what a 'non-linear narrative' is.

It is comforting to know that some films can be rather high concept and still satisfy audiences. Even though it's not a perfect film, I really thought 'Inception' did the rarest of things by combining action with an intelligent story and excellent practical special effects. The best part about it, though, was it was a story that could not be spoiled by any foreknowledge of the film at all. Even if you knew everything about the film going into it, you'd still be in the same boat as everyone else at the end when the whole plot is distilled down to a single spinning top which would indicate if the movie was a dream or reality by its actions. When I saw the film at the cinema I felt the same way as I did at the 'From Dusk 'til Dawn' screening all those years ago. The audience emitted a collective groan when the film cut to black leaving the question forever unanswered.

It's great to know that other people feel the same way as me: 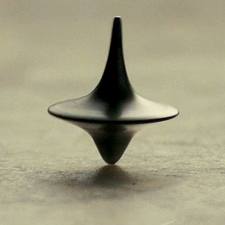