I'm not the type of person that normally watches a show like 'Artscape', but last week I noticed they had a profile of one of my favourite artists - Jeffrey Smart. The documentary was aptly titled 'Master of Stillness'. It occurred to me that Smart is the rarest of beasts - an almost universally-appreciated artist who is actually great.

I was perhaps dismissive of the documentary initially, as it seemed to be aimed at the layman and only a promotion for Smart's new exhibition at Adelaide's Samstag Museum. After they announced Jeffrey Smart had retired, I got down off my high-horse. I was not aware of this fact.

I suppose this shouldn't be surprising as the guy is 81, but there must be some painter equivalent of 'dying on stage', like some spotlight-starved popular entertainer. I suppose fine-artists know when their physical abilities might be waning. His paintings to me seem like something that have-always and will-always exist.

I suppose I first became aware of Jeffrey Smart when I was a kid, through a painting that was on the cover of a collection of short stories by Peter Carey that my dad bought called 'The Fat Man in History'. 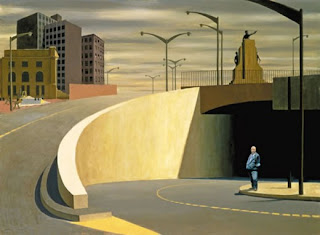 The actual painting used was called 'Cahill Expressway'. I don't think I ever read the book, but the cover photo always impressed me. It's an earlier work by Smart from a period when he lived in Sydney. Whilst it features an almost geometric arrangement of objects and a sense of space which he has become synonymous with, the colours seem a little more muted in a Post World War II style, as opposed to the vibrantly colourful work he would become known for later when he moved to Tuscany.

If there is any link between different types of art that I like, it's usually simplicity, playfulness and a sense of humour. The inclusion of an 'Alfred Hitchcock' character in 'Cahill Expressway' is something that drew me to the work initially, even though figures are usually dwarfed by the landscape in most Jeffrey Smart paintings.

Probably one of Smart's funniest paintings (and therefore one of my favourites) is 'A Portrait of Clive James' which takes this idea of a figure being dwarfed by the landscape to the extreme. 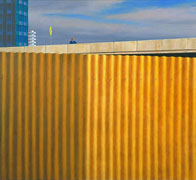 In 'Master of Stillness' Clive James says he is featured almost imperceptibly in the background because Smart found him 'too ugly' and his features 'too uneven' for him to be good subject matter. Smart (perhaps tactfully) denies this. To be fair, people are almost never the primary focus of Smart's work.

It is interesting that Smart is considered one of the foremost Australian artists, when he has lived in Italy since the early 1960s. Looking at a lot of his work, it never occurs to me that they are of Italian landscapes, because a lot of the iconography is universal. This is because Smart's landscapes avoid the cliches of the countryside and instead focus on modern architecture, which could be from any major city in the world in the late 20th century. I think if there is anything specifically Australian about his work in Italy, it is probably the sense of space. 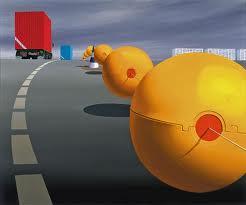 What Smart seemed to appreciate was that there could be beauty in anything and any image that moves your soul can be broken down into a series of shapes. David Byrne pointed out in the film 'True Stories' that 'highways are the cathedrals of our time'. I agree with this sentiment! Maybe it's because I live in an urban environment, but buildings speak to me more than trees. I have no real reference point for appreciating a forest, so to me it makes sense to find beauty in your surroundings. I am constantly amazed when people ring up radio stations and complain about wind farms. I think they're quite beautiful and give an interesting contrast to the natural environment. They are undeniably more breathtaking than a coal-fire power station, but, to me, even toxic smoke billowing into the atmosphere can have its own sad beauty. 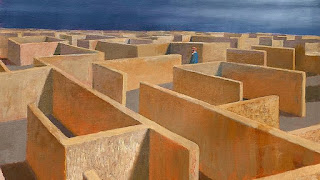 One of Smart's final official works was called 'Labyrinth'. When I first saw it, I have to admit to not being particularly impressed. To me, the image almost seemed to verge on cliche. After careful consideration, though, I realised that it isn't easy to sum up a career in one painting and this one is probably as good as any. The sole figure (presumably supposed to represent Smart) is trapped in quiet contemplation amid his own trademark 'stillness', forever trying to solve the maze. The 'Master of Stillness' documentary suggests that it references Smart's own childhood in Adelaide, where he first encountered the urban environment in the backstreets and alleyways of the suburb in which he lived. When I consider this, it evokes an image from my own childhood.

I remember playing in the backyard by myself when I was about  six or seven years old, jumping off the steps to see how high I could go without physically hurting myself. It occurred to me whilst doing this that I, solely, was in charge of my actions. It seemed like an amazing revelation at the time, that, in this moment, I could decide to to follow an almost infinite number of possibilities. I could keep jumping off the steps until I broke my leg, pull faces at the neighbour's dog, yell at the top of my lungs, or even go and help my mother make dinner (this never happened). I suppose I had become aware of 'the present'.

This odd sense of wonder about the silliness and scariness of being in control of your own destiny certainly has waned throughout the years and it has become harder to find the time for quiet contemplation and stillness.

In this respect, I have to be thankful for Jeffrey Smart and his paintings, because they remind me that this place still exists.