Nostalgia Ain't What It Used To Be

I watched the first episode of the television series 'When We Left Earth' recently, which deals with the early years of space exploration. The show features a lot of grainy super-8 footage of astronauts from the early 1960s. I had seen a lot of this footage before, but it struck me as odd watching it as an older person. The sixties now don't seem as long-ago as they did when I was a kid.

My first thought was that the film stock used at the time had aged in a way that looks identical to some sort of nostalgic filter you might find on a photo application such as Instagram. It also struck me as unfair that these sort of filters seem to imbibe every digital photo with the same weight of historical significance as this footage from the early years of space exploration. In my mind the footage from the sixties has earned its right to be washed-out, grainy and scratched, whereas modern photos taken on digital cameras automatically look cherished even when taken on a whim. Older analogue photos were lovingly stored, catalogued and passed-around during important family get-togethers. Only the important ones survived! I predict most photos these days will not last beyond a simple hard-drive crash, and most of them will not be missed anyway. 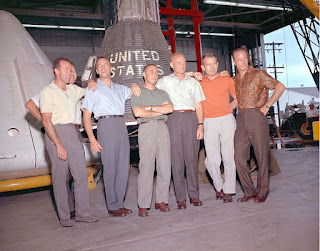 Even though the footage from 'When We Left Earth' has been ironically re-framed as appearing 'modern', there are, of course, cultural indicators that show this footage was from the 1960s and not the 21st century. The most obvious and striking indicators are the types of cars and fashion on display, but I found myself laughing out loud when the narrator announced the seven astronauts that were to be part of the Mercury missions were 'the finest physical specimens available.' A shot of the group of men showed what looked, by modern standards, to be a bunch of middle-aged men with pants just a little bit too high, receding hairlines and possibly a diet too high in red-meat, resulting in high blood pressure. To top it all off, a couple of them were smoking!

Of course these men were probably super-fit and the ideal candidates for the job - it's just they were old-school heroes where the definition of manhood was different and people were not as concerned with outward appearance as much as achieving results. It's a shame that people seem less concerned with results these days. 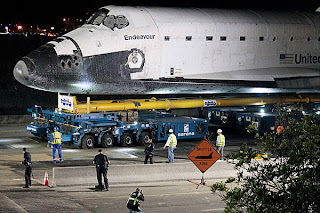 In light of the recent retirement of the Endeavour space shuttle and its installation as a tourist attraction in LA, it was saddening to watch the early footage of the Mercury missions where concerned Americans of all ages watched the giant rockets take off. People reacted like they were at a rock concert and you could visibly see the excitement on people's faces as the massive rockets lifted off into the atmosphere. It is a sobering contrast to hear reports of people crying as a dusty Endeavour space shuttle slowly wound its way through the streets of LA at five miles-per-hour towards its final resting place at The California Science Centre.

Of course, a lot of Americans would have seen the death of the space-shuttle program as an allegory for the state of modern America following a global financial crisis, a seemingly un-winnable war in Iraq and a more insular country than the one that looked forward to the future and had a thirst for discovery in the 1960s. NASA would probably disagree with this summation. They claim that the space shuttle program was retired so that they can focus their resources on Mars, but surely space exploration must not be the main priority of the American Government at the moment?

The key to getting more funding for NASA, I believe, involves engaging the public with the space program again. I love documentaries on space exploration, but modern CGI-enhanced depictions of missions to Mars don't inspire me in the same way as the gritty seat-of-your-pants images from the Apollo and Mercury missions. Also, as a child, there seemed to be something real and visceral about the images of Jupiter taken from Voyager, because you knew they were not computer-ehanced and involved the simplicity of light passing through a lens. Nowadays the public seem to be numbed to fantastical space imagery that could just as easily be rendered in a computer game or Hollywood blockbuster. 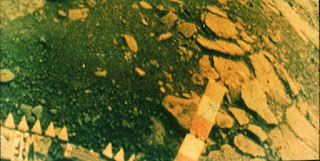 Maybe this is why images that are obviously not computer-enhanced and border on the mundane seem to resonate with me. My favourite shot from a space mission ever was taken in 1975 by the Russian spacecraft Venera 9 as it landed on the surface of Venus. It managed simply to get a picture of the ground it landed on before the camera was crushed by the weight of the atmosphere. It's a pretty boring shot, I suppose, but as long as you are aware it's taken on another planet, then the possibility of what lurks beyond the borders of the shot makes it quite magical in my opinion.

The story behind the photo also enhances its value. I admire the risk-taking and the man-power involved in this possibly futile mission all to get this one not particularly remarkable shot. To me this is what makes space exploration interesting, the high risk in overcoming almost impossible odds to achieve a simple goal. Watching some poindexter sweating over a slide rule in the late sixties calculating a descent velocity is far more engaging and indicative of the inherent risks of space travel than any CGI depiction of a martian landscape.

Ultimately, I think to really sell the space program to the public again, NASA will have to raise the stakes and send a person to Mars. Maybe people are just sick of looking at pictures altogether. No image could possibly engage the public as much as having a person step onto the surface of Mars and being speechless.