A Public Life - A Private Hell!

Many years ago I was challenged to think of a title for my autobiography. I assumed that by the time I got around to writing such a document that I might have achieved some sort of celebrity status, so I tried to pick a title that was worthy of the highs and lows that a celebrity life entailed. I settled on the title 'A Public Life - A Private Hell!'

A friend of mine suggested that this title was too obvious and an autobiography needed to have more of an air of intrigue about it. He suggested revising the title to 'A Public Life in Private Hands'. I agreed with this assessment and made a mental note to use this title when finally the time came to reward the hungry public with tales of my exploits.

However, after reading two autobiographies in the past year, I've changed my mind and have now reverted back to the 'Private Hell' title. 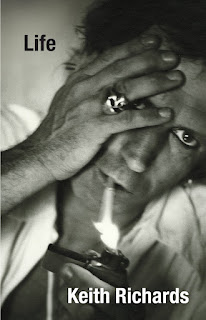 The two books I read were Keith Richards' 'Life' and Michael Caine's 'From Elephant to Hollywood'. By far the better of the two is the Keith Richards' book. Like the title, the book cuts straight to the core of the subject. Even if you're not a Rolling Stones fan I suggest reading it anyway because Keith is a surprisingly witty individual and is as honest and forthright as a man who has lived for a few decades in the public spotlight can be. He comes across as self-effacing in the book and addresses his many shortcomings in a way that makes you realise he is aware of how he is perceived by the public. 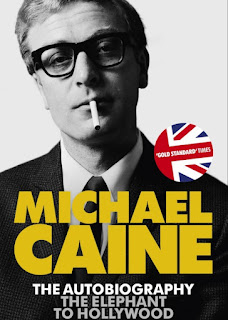 Michael Caine's book 'The Elephant to Hollywood', like the title, is a bit more of a convoluted affair, which never really gets to the emotional core of the subject. Perhaps Keith's ghost-writer James Fox was able to spur Richards on to greater heights, but Michael Caine's biography seems to be written from a more defensive point of view, which would lead me to conclude that he wrote it himself.

It's not a bad book, however, and Caine should be commended for his attempt. Certainly he has led a very interesting life with some surprising twists and turns both personally and professionally, but the book reads like a list of accomplishments and famous people he has met, rather than a life closely examined.

Strangely, there are pearls of wisdom that I use from both books on an almost weekly basis. Both Caine and Richards are good working-class English lads and enjoy simple English food. Both men included recipes in their autobiographies that they have enjoyed throughout their lives.

Michael Caine describes how to make the best roast potatoes... I tried them and they are! Basically it involves par-boiling the potatoes and placing them in a baking dish with olive oil (don't skimp on cheap oil) that has been infused with garlic and rosemary. Remove the garlic and rosemary before putting the potatoes in and turn to coat. Sprinkle with celery salt and pepper and bake in a hot oven (200 degrees celsius) for an hour turning every 15 minutes. You won't be disappointed.

Richards' describes how to make simple but tasty bangers 'n' mash and goes in to great detail in regard to his love for Shepherd's Pie (you can find the recipe online).

Here's one I made earlier: 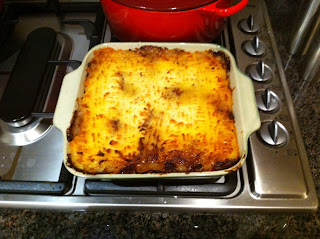 Maybe I should take a leaf from Richards' and Caine's book  and start my autobiography with a simple recipe. Okay readers let's begin - Here is the one recipe that I have concocted in my life that I can truly call my own.

In a saucepan saute' the onion and garlic until soft (but not brown). Add the tomatoes and crush with a wooden spoon. Add vegetable stock and herbs. Bring to the boil and then add broccoli, lentils and red wine. Reduce heat and simmer until the sauce thickens (about 30 minutes). Add salt and pepper to taste.

Heat oven to 180 degrees celsius. Tip saucepan contents into a baking dish and arrange the potatoes in a single layer. Top with grated cheese. Place baking dish in the pre-heated oven until cheese is golden.


Note: I prefer recipes that take a long time and that require an excuse to purchase a bottle of wine. The beauty of this recipe is once it's in the oven you can drink the wine while waiting for your meal. I also like to multi-task and might also put on a nice record or play the guitar while waiting for dinner. Enjoy the process and don't think of it as a chore.

I hope this recipe tides readers over until 'A Public Life - A Private Hell' is written and officially released... Now that I think about it, I could probably do without the private hell part; and the public life part doesn't really appeal to me as much as it used to.

Maybe it's back to the drawing board.

Enjoy my recipe in the meantime.