Growing up in Brisbane in the 70s and 80s I got used to seeing iconic landmarks getting routinely bulldozed to appease private interests, despite any amount of public outcry. It continues to this day, with the most recent inclusion on the list being the Hoyts Regent cinema in the Queen Street mall.

I live in Melbourne now, but I was in Brisbane a few months ago and happened to walk past another iconic Brisbane building that is boarded up and forlorn - New Farm's Village Twin Cinema. This cinema in its heyday will always be what I think of when I think of an ideal viewing experience. 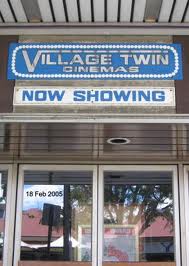 With decreasing box office sales, increasingly elaborate home cinemas and the explosion of online piracy, the laws of commerce probably don't favour a cinema with only two screens, no cup holders and a less than state-of-the-art audio system. The Village twin made up for any failings in these areas by a wealth of unique design charm, as well as screens which were big enough to give an epic feel to the most humble of films. It was also the first place where I saw '2001: A Space Odyssey'.

I was about six or seven years old when Star Wars first came out in 1977. Like any kid of my generation it was a revelation and the beginning of the golden age of the blockbuster. I originally saw it with my family and my lasting recollection of this first viewing was literally jumping out of my seat in the trash-compactor scene when the walls start to converge on our hapless heroes. I was holding a box of Jaffas in my hand and a fair amount of them flew out of the box and rolled down the aisle. I had become a cinema cliche!

I saw it several times after that and on at least one occasion I was lent out to one of my dad's friends because she didn't want to go and see a 'kids' film' by herself. I didn't mind - I loved Star Wars and to my shame identified with Luke Skywalker more than Han Solo. Now that I'm an adult I want to be Han Solo - who wouldn't? - stupid kid!

My dad must have noticed my interest in sci-fi and made the incredible leap of logic to think that a seven year-old Star Wars fan might enjoy a screening of '2001: A Space Odyssey' at the good-old Village Twin.

The simple fairy tale whimsy of Star Wars was replaced in 2001 with a deep, disjointed, metaphysical journey. Lightning-fast action sequences were replaced by ponderous snail-paced operatic space ballets and an indecipherable psychedelic third act light show. It was the first time I remember looking over at my father and thinking 'you are a strange human being'. Despite my initial misgivings (or perhaps because of them) '2001: A Space Odyssey' has gone on to be my undisputed favourite film. 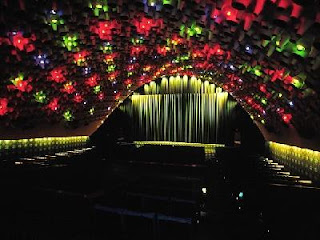 I think the reason I eventually embraced this film had to do with my dad thinking I was mature enough to understand it, but a lot of it had to do with the atmosphere in The Village Twin cinema. The ceiling in one of the two rooms had these strange, white, conical fixtures jutting out which gave the impression of being inside a starship. They were topped off by flat black circles which looked like speakers (which they were certainly not) and if you stared into them they gave a feeling of infinity outside of the confines of the cinema. This, combined with an early 1970's array of rainbow-coloured down-lights was a perfect visual accompaniment to '2001'. The other cinema had a similar 1970s aesthetic but featured square panels and a purple lighting scheme ( I liked both cinemas but always secretly hoped for the '2001' room). 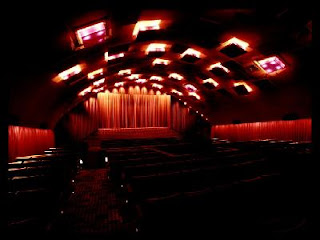 Now that I'm a parent I figure that children probably grow up faster than when I was a kid, so when my daughter turned three I decided it was time to show her '2001: A Space Odyssey' which I now own as part of my 'Stanley Kubrick: A Life in Cinema' box set collection. She was surprisingly attentive and seemed to  understand a lot of what was going on. The only thing she seemed to be afraid of was at the end where there is a close-up of a blinking eye which changes colour. Apparently, a monkey beating his enemy to death with the sun-bleached bones of a fellow tribesmen doesn't warrant any need for concern from this new generation.

My Daughter's surprisingly astute critique of '2001: A Space Odyssey' is as follows:

"It was pretty good but a bit scary. There was a baby and a big eye"

What will she remember about it?

Now that I think about it I probably didn't even see 2001 at the Village Twin. It just seems like the place I should have seen it. My daughter Clementine will probably mis-remember seeing it at the iMax cinema in Melbourne (in 3D even!) instead of in the lounge room at home. The one thing she will remember (which is open to debate) is that her dad is 'a strange human being'.

My job is done.