When I was a kid I enjoyed pretending I was a superstar and would often perform impromptu shows for my mum's friends. I would pretend I knew how to play my toy ukelele whilst delivering an evocative and emotional rendition of the only song I knew the lyrics to - John Denver's classic hit 'Take Me Home Country Roads'. There may have been a cowboy outfit involved in the performance - I don't really remember.

I didn't have much of a love for John Denver besides my admiration for the fact that he'd been on The Muppet Show, but I was a professional and knew my mum's friends probably liked the wholesome down-home charm of Denver. It was like shooting fish in a barrel. After the performance I would gratefully acknowledge their rapturous applause before engaging in a little small-talk to acknowledge their fandom. To maintain my air of mystery, I would slink away after a few minutes for a bit of 'me time' and to decompress from the pressures of stardom and dissect the nuances of my performance. 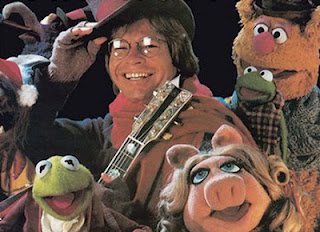 A bit over a decade later (1987 to be precise) I found myself in a restaurant in The Blue Mountains near Sydney with my parents and my sister. I suppose I was seventeen at this point. The couple at the table next to us were discussing the lyrics to a song which sound especially inane and mostly involved listing  cliched Australian landmarks. Even though he no longer had his trademark round glasses and didn't look like a country boy, we recognised the man instantly as John Denver. He was with his wife (fiancee?) at the time Cassandra Delaney.

We did what anyone would do in this circumstance and talked about them under our breath for a while. I prayed that my parents wouldn't speak to them because, being 17 at the time, everything my parents did either 'sucked' or was painfully embarrassing. I think I would've preferred that the celebrity at the table was Bryan Ferry rather than John Denver, but then I would've been disappointed that he would stoop so low as to eat in a restaurant with someone like me.

I've never enjoyed speaking to famous people; partly because they always seem to be self-involved and living in an a state of arrested development - cocooned from reality by a team of sycophantic minders who indulge their every whim. Mostly though, I'm just jealous of the fact that I never get a chance to act like that.

There were no minders at the restaurant this night and my parents didn't have to speak to Denver - he spoke to us! When we ordered dinner my father ordered fish. As the waiter was bringing it to our table Denver leaned over and asked my father what it was. Dad replied 'rainbow trout'. Denver looked excited and immediately called the waiter over and changed his order. In some small way we had influenced the life of a legend!

I often wonder why he spoke to us. Was he just trying to give his fans a giddy little thrill - like I had done  for my mum's friends all those years ago? Was he homesick and just wanted someone to talk to? or was he just sick of listening to us talk about him under our breath?

It is a testament to the power of celebrity that we still joke about that evening to this day and I'm sure it's something that Denver himself would have no recollection of if he were still alive. Alas, he isn't. John Denver died after crashing an experimental plane in 1997. When my family first heard about it on the news the first thing we did was discuss that night back in 1987. It's funny but I even considered the possibility that we may have contributed to his death. Maybe that rainbow trout was loaded with mercury and it took ten years to manifest itself as poisoning in Denver's bloodstream, debilitating him on that fateful flight.

On some level, I feel sorry for celebrities like John Denver. They can never just sit down to a meal like normal people and are trapped in a world of their own making. There's no way out. John Denver could never just say 'screw it' and apply for a job as an office temp - everyone would recognise him. Instead he must have looked for other distractions from his music career. Obviously there was nobody around who cared enough about him to tell him that flying experimental airplanes is dangerous and not a good idea. Maybe Denver was looking for a hobby that matched the thrill of his early performances before the machinations of the industry and endless touring turned a passion into merely 'a job'?

Fame itself is a terrible narcotic. I myself have never been able to shake the excitement felt from those early performances of 'Country Road Take Me Home' in front of my mum's friends. I still perform to this day. I no longer play that particular song but I have some of my own songs that I perform a handful of times a year in front of my ever-loyal fan base of around ten people. Maybe I'll ask one of them what they're having for dinner next time I perform in a pub to give them something to talk about for the next couple of decades. Sure, I may not as be universally recognised as John Denver, but at least I have an office job I can turn up to on Monday morning.

Perhaps it's time I started wearing the cowboy outfit again.
Posted by Trevor Ludlow at 21:54