A Portrait of The Artist

I don't know if anyone else is the same as me, but it sometimes feels like the less effort you spend on something - the better it turns out. I think this has to do with the fact that there is a freedom in having no expectations - especially when attempting something new. When you get approval from another party it makes you wonder what essence the thing you created has that connects with someone, and makes you try and recapture that instead of moving on. It's the proverbial 'goose that laid the golden egg' scenario.

I've never considered myself much of an artist but occasionally things I've created have connected with people. The first instance I remember was in grade two when I painted a picture of a rocket ship. It won third prize in the school art contest!... I wish I still had that painting now.

Later, in grade eight at high school, my art class was challenged with depicting a post-apocalyptic scene. I noted that nearly everyone painted a picture of a mushroom cloud. It occurred to me that to stand out from the pack I should try something different, so I painted a picture of a fried chicken. I don't know what the connection was with the subject, but it sure got the teacher's attention. I learned a valuable lesson that sometimes having a unique vision is more important than ability.

After school, I didn't really pursue art at all until in the mid 1990s when I found myself unemployed and at a bit of a loose end. Sure I could have gone out and looked for a job, but dusting off some old oil paints I found in my parents' garage seemed like more of an appealing prospect.

The first thing I attempted was a weird 'evening bedouin-desert landscape' featuring a tent and a camel by an oasis. The sheer strangeness of it seemed to appeal to my friends. I don't have a photo of it but I think my parents have stored it away somewhere. I attempted some more fantastical images but they didn't really seem to work as well, so instead I turned my attention to images closer to home. 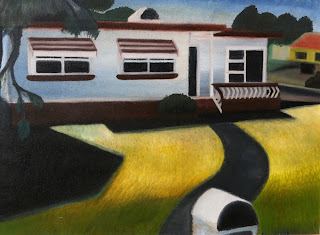 On a holiday to Byron Bay this beach shack caught my attention. It's much more dilapidated in real life, but it sent me in a direction of trying to idealise images rather than capture some sort of photographic realness. I sometimes fancy returning to Byron Bay and dropping a photo of this painting in the owner's mailbox. I wonder if he'd recognise it?

Just as I was hitting my stride with painting I got a job and didn't really attempt anything new for about a decade. Now that I have a daughter and spend a lot of my day just hanging around the house I've returned to the task with the same fervour as an unemployed 20-something. 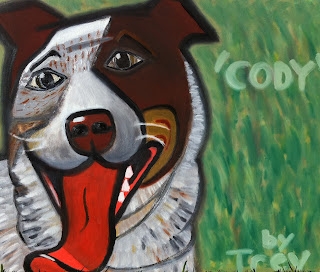 I banged this picture of my dog together in about a day (that's pretty quick for me). The only art I've really followed recently has been all the graffiti around the Brunswick area. I've been impressed with how fast these kids work so I thought I'd try something equally as quick (without breaking the law). 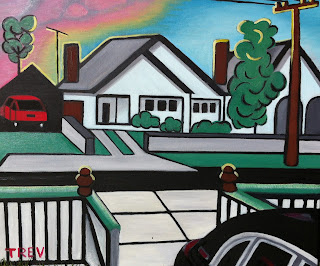 This is our neighbours' house across the road. The first thing I see in the morning before heading off to work. It's intended as a companion piece to the Byron Bay house. A lot of people ask me why I didn't paint a picture of my own house. The short answer is - I never see my own house because I'm usually inside it. That's our car in the foreground. 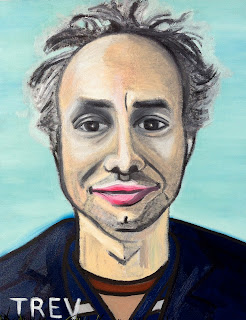 Recently it occurred to me that I've never attempted a portrait of a person. My dog doesn't seem to care one way or the other about his portrait, so I chose to do one of myself - I noticed a look of fear in my wife's eyes after I did the dog portrait - I think she thought she'd be next. She's safe - for now. One thing that I've learned from doing a self-portrait is that it's really hard, because your opinion about yourself changes from day to day and you tend to make yourself either more ugly or beautiful accordingly. I think this painting is a nice middle ground.

I don't know what my next painting will be but at the moment I'm happy to keep going as long as I have the time. I don't mind being remembered for these paintings as long as nobody unearths any of the crushingly embarrassing failures I've been involved with that have got me to this point.

The year is 2386. A lone figure in a radiation suit walks through the ruins of an area of Australia once known as South East Queensland. A nuclear attack has left the area uninhabitable following a catastrophic computer failure in North Korea which resulted in the country's entire nuclear arsenal deploying simultaneously - wiping out eighty per cent of the world's population in the year 2050... So it goes.

In Australia, only people living in The Outback survived and were left to repopulate the earth.

The figure in the radiation suit is an anthropologist sent to find out about the 'before times'. As he walks through the barren, featureless, landscape, suddenly he falls through a hole in the ground. Semi conscious - yet thankfully uninjured, the scientist surveys his surroundings and notices he is in some kind of demountable building that houses art-works by young people.

The anthropologist is astonished to find that most of the artworks are perfectly preserved and from the year 1984. Rummaging through the pile of delicate canvases, tears well in his eyes as he encounters image-upon-image of mushroom clouds enveloping an ashen sky. 'How prophetic, how wise' he thinks to himself. 'If only we had listened to the children then these dark days would never have fallen upon us'. Heart heavy and hands shaking the anthropologist continues. He comes across a depiction of a fried chicken. Brushing the ancient dust away, the young artist is revealed to be a child by the name of Trevor Ludlow. 'This guy doesn't get it at all' he whispers to himself - and throws the painting away in disgust.