I read a review recently of the soundtrack to the film 'Guardians of the Galaxy' which astutely observed that it's a soundtrack for people that love 1970s rock but don't own any 1970s rock albums.

I am a fan of 1970s rock and own many albums in the genre. I bought the 'Guardians' album anyway, because many of the songs are AM radio classics that I remember from when I was a child driving around with my mother and sister for what seemed like endless hours in the back seat of our white Ford Escort, either on shopping centre visits, or to the outer suburb of Oxley where my father was working as a pharmacist.

In the brief interludes between fighting with my sister and reeling from threats coming from the front seat of the car, I found time to absorb some of the important hits of the day. It's amazing what sticks with you over the years and what can take you back to younger, simpler times. The songs that still seem to be able to do this are Glen Campbell's 'Wichita Lineman' and the divisive novelty hit by Rupert Holmes - 'Escape (The Pina Colada Song)', which incongruously is featured on the 'Guardians' soundtrack.

I've always liked a big chorus and 'The Pina Colada Song' was one of the earliest examples I can think of that managed to instil this love in me. (Perhaps the other one was Kate Bush's 'Wuthering Heights')

To my seven year-old brain 'The Pina Colada Song's' chorus also posed a number of mysterious questions that I wasn't sure I knew the answer to. I can remember running through responses in my head as I gazed vacantly at the passing traffic, while absorbing the vibes in glorious mono that were emanating from the car's speakers.

"Uh, I'm not sure, but I know they're made with pineapple juice and coconut, so they could be okay." I responded.

"Of Course! It's a chance to race leaves down the storm drains with my friends."

"Do you like making love at midnight - In the dunes on the Cape?"

"Well, here things get tricky. I've heard some frankly terrifying rumours in the schoolyard from some unreliable sources, but I'm willing to concede that love is a good thing, so 'making love' can't be bad, right? Also, I like the challenge of staying up until midnight and the beach would be a nice place to hang out."

The mystery of the song stayed with me and even made me aware of the possibility that I might have a romantic soul, even though the young Trevor only had the faintest inkling of what 'romance' meant.

Unfortunately, through the years I also became aware that being 'romantic' to me came with a proviso that I can neither say nor do anything of a romantic nature for fear of embarrassment, rejection, or some soul-paralysing combination of both. But deep down, I know the romantic Trevor still exists somewhere.

The seven year-old Trevor was not available for comment when I recently re-listened to the song from an adult perspective which left me feeling quite critical of the protagonists.

For a start, the guy is responding to a personal column while his wife is lying there next to him in bed.

Why don't they talk?

Of course, the ultimate irony of the song is that his 'lady' is the one who placed the add in the personal column in the first place, but he is too dumb or insensitive to even recognise that the list of the woman's desires corresponded perfectly with his wife's.

Selfishly, the man responds to the add and doesn't even mention that he's already in a relationship. What's worse is that he even suggests meeting at a bar called 'O'Malley's', which is obviously a favourite place where he would take his 'lady' for a special night out. He's rubbing her nose in this whole tawdry affair!

The 'lady' is not without fault in this whole ridiculous charade. She didn't even suspect her husband when he suggested that their grubby little get together should take place at her beloved O'Malley's.

The whole scenario comes to a head when they meet and realise that they both have responded to the same personal column ad. Instead of an ugly public scene of shouting and fingernails dashed across lovers' cheeks in a fit of fury, there is a laughing acceptance of each other.

The adult Trevor can't help feeling that maybe they deserve each other!

However, even as I write these words and come to this conclusion about the song, I sense a remnant of the romantic Trevor suggesting that maybe the point of the whole song is forgiveness and they have learned to accept each other for what they are.

Maybe the whole meeting was a catalyst that allowed them to meet half way and offer a romantic gesture without fear of embarrassment?

Maybe it's important to have a catalyst to allow yourself to express a romantic notion?

Perhaps we should all stop fighting over the holidays and take our significant others out for a Pina Colada instead?

It's what the young Trevor would have wanted 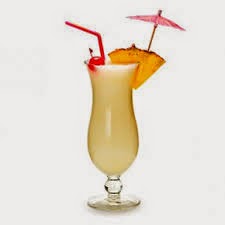