I've been living in Melbourne for many years now, but this is the first one where I dared to venture to 'The Royal Melbourne Show.'

I have fond memories of visiting the Brisbane's own version 'The Ekka' when I was a kid, so I was not averse to the idea of reliving happy memories. 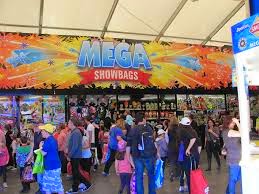 The one thing that had stopped me up until this point was remembering myself as a child and how I would transform from a benevolent free-spirited young man, happy and content to play in the wondrous garden of my own imagination, into a rampant, materialistic capitalist at the very mention of the word 'showbag.'

The fact that I would be attending the show this year with my daughter Clementine, who is six years old and in the prime showbag demographic, gave me cause for concern.

We ventured forth anyway.

The train ride to the show was as cramped and uncomfortable as I expected and the exorbitant entry fee had, at the very least, kept up with the inflation rate. Overall, I was surprised at how similar things were to the last time I attended, even though many years had passed and we were in a completely different geographic location.

The entry point to the show from the train platform was through 'Side Show Alley.' I instantly had fond memories of being a teenager and going on every ride imaginable, before finally being defeated by the 'Gravitron' and regurgitating pink cotton-candy vomit into a nearby bin. As an adult, it struck me as rather silly to put the food stalls right near the rides. To me, this just seems to be asking for trouble and I carefully navigated any suspicious-looking puddles as we ventured towards the main showgrounds.

There were hordes of eager children just like Clementine, dragging around weary and reluctant parents like giant pet gorillas, with expressions on their faces that could pass for World War II concentration camp survivors dreaming of home. Their children, conversely, were absorbing the neural stimulation and trying to process all the data. A lot of them had already been unable to do this and had reverted to the factory setting of 'tantrum' mode.

Amongst all this family dynamic I was delighted to discover still existing one demographic that I had almost forgotten about: The in-betweeners.

I remember being one myself, caught between not being interested in showbags anymore and too young to go to the pub. Invariably, this marginalisation leaves in-betweeners in an unenviable situation of walking around with a look that is a mixture of self-consciousness, a disdainful superiority and the added awkwardness of the 'teenage date' scenario, if you were lucky enough to attend with a partner.

I find it very hard to differentiate certain 'tribes' when I look at teenagers today. They seemed a lot more defined when I was younger, but now with globalisation, I suspect even the time tested divisions between teenage subcultures are falling in a similar manner to the Berlin Wall circa 1989.

The only subculture I really miss is the Goths. I used to silently appreciate their efforts in a sweltering Brisbane summer, where their dedication to flowing black robes and pancake makeup in 40 degree heat struck me as a noble triumph of style over logic. 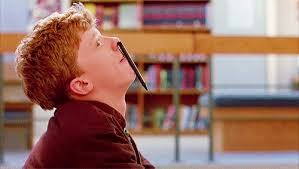 Alas, I was not fortunate enough to identify with any subculture when I was a teen, so this left me a slave to mid eighties fashion, which unfortunately involved a lot of pastel coloured shirts and baggy jeans. In 1980s movie terminology, I would describe myself as something of a 'Brian' from 'The Breakfast Club' or an even-more awkward 'Ducky' from 'Pretty in Pink'... I was not cool.

This lack of coolness led, inevitably, to not being troubled by any female companionship during my early teenage years. I was spared the 'awkward date' scenario.

Luckily, this left me free to enjoy outings like Brisbane's 'Ekka' in the way only a teenage boy can.

The Ekka was a particularly special event for me. It was one of the first places I was allowed to go unaccompanied by my parents, so I took advantage of my newfound freedom in the weirdest ways possible. One time a friend and I went to all the exhibition stands and pretended we were German exchange students that had lost our way and asked for directions in our rudimentary English. The tricky part was to try and keep straight faces while we did it. We were both surprised at how often it actually worked.

It was almost touching in the way some stall holders would ask us about our home towns back in Germany, so we felt we owed them the courtesy of keeping up the charade. We only stopped because we were laughing so hard it was impossible to continue with tears rolling down our cheeks. 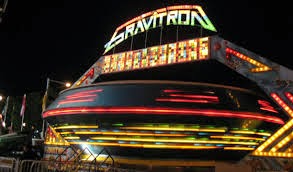 We would follow this up by literally going on every ride at the show, trying to keep up our 'exchange student' act the whole time. We pretended to be terrified on the rides designed for much younger children and played it ultra-cool on the stomach-churning rides that would make an astronaut reconsider his vocation. Luckily for me the 'Gravitron' was the last ride we attempted. There is no shame in spewing on the last ride of the day!

Eventually, these shenanigans spilled out beyond the confines of Ekka grounds and the young Trevor was unleashed upon Brisbane City itself!

Like a typical teenager, I still blame my parents for any trouble I got up to as an in-betweener. I ventured forth resplendent in my latest pastel-coloured attire to the new frontier of Brisbane City, armed only with enough money for a movie and the train fare home. What was I supposed to do in the intervening time between when the movie ended and I was expected to be at home?

As it turns out, my partner in crime and I wandered around the 'Wintergarden Centre' and looked for any free stuff we could find.

Luckily, the ABC Shop was giving away some giant posters of 'Count Down' star Molly Meldrum, so we helped ourself to their entire stock. 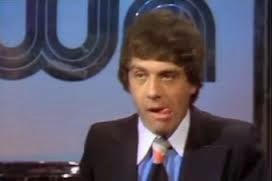 We decided to go to the top floor of the centre, which was an open-air carpark. We used our considerable skills at constructing paper airplanes to launch a squadron of Molly Meldrum jet fighters on an unsuspecting public in the mall below. They sailed gracefully on a warm summer breeze towards their targets, with Molly's distorted yet gormless expression smiling back at us.

Eventually, people started to notice their airspace being invaded and squinted skyward to see where the squadron leaders might be located. Finally, we were spotted and beat a hasty retreat like a giddy couple of school girls. (Except for the fact we were boys, this was an otherwise accurate description.)

Back in 2014 at the Melbourne Show, I consider these follies of youth as Clementine and I find a spot of brown grass under a makeshift tarpaulin. I enjoy what is certainly going to be my first and last Dagwood Dog of the year as Clementine explains the contents of her showbags that she has badgered me into buying. One day I suppose Clementine will be an in-betweener herself. I wonder what weird things she'll get up to? I am actually thankful she's still content with her showbags at the moment.

It occurs to me that being an in-betweener was not such a bad thing after all. Besides the long stretches of boredom sitting around waiting to grow up, it was also some of the best fun I've had that you couldn't begin to get away with as an adult. There was a sense of rebellion, nobody got hurt and we weren't actually doing anything wrong. I kind of miss the opportunity to act weird without people sitting in judgement.

As I watch all the weary parents leave for the day I wonder: 'Is it too late to become a Goth?'