It was in the mid 2000s that me and the wife went to the US for a holiday. We started in San Francisco, traversed the country for a few weeks and ended our trip with a couple of days in Las Angeles. On the second-last day before we flew back to Australia, I was desperate to do something that I didn't consider to be on the standard itinerary of an LA tourist.

I remembered a TV show I had seen a few years earlier - 'Journeys into the Outside', which was presented by one of my favourite British pop stars - Pulp frontman Jarvis Cocker. In the show, Cocker travelled America looking at 'outsider' artworks, which were often of dubious quality, yet always accompanied by interesting stories and colourful, often desperate-sounding characters who created the works. 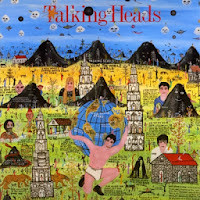 One of the artists I knew quite well - Reverend Howard Finster - who designed Talking Heads' 'Little Creatures' album cover, but the rest of the artists depicted in this documentary as part of the 'folk-art' scene were new to me.

Someone who stood out from the pack was Simon Rodia, an Italian immigrant construction worker who built an impressive interconnecting system of towers (some of which are almost 100 feet high!) in his back yard in the LA suburb of Watts, over a 33 year period. They have henceforth become known as the Watts Towers. Rodia apparently signed his land over to a neighbour and disappeared once the towers were completed and was never seen again. This story sounded intriguing to me and a visit to the towers seemed like a perfect way to spend our last day in LA.

There was a Watts Towers Tourist Centre listed in the phone book which I rang. I explained to the friendly lady on the other end that we were currently staying in Beverly Hills, had no car and were wondering how to get to Watts. She said there was a bus that went directly to the towers but it was not operating that day and the best way to go was by car. She said I could also go via the 'Blue Line' train and get off at Watts Station before ominously adding that this was  not advisable.

The fact that LA apparently had a public transport system was news to me and I felt encouraged by this revelation. Some trepidation tempered my enthusiasm when I looked at the 'Blue Line' train route and noted that Watts Station was only two stations away from the infamous suburb of 'Compton'. 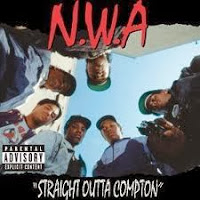 My middle-class white, suburban mind automatically conjured-up sounds and images from the classic NWA gangsta-rap album 'Straight out of Compton' and their stirring call-to-arms anthem 'Fuck the Po-lice'. The media had led me to believe that South Central Los Angeles was the home of indiscriminate drive-by shootings, prostitution and drug deals. Surely, the media wouldn't lie to me?

Further investigation of the town of Watts also revealed that it was the centre of race riots in the 1960s which basically flattened the town to the ground. I noted that the one landmark that wasn't touched during the mayhem was the Watts Towers. An image of an angry African American about to throw a molotov cocktail at one of the towers entered my mind. I could picture his expression softening as he gazed in wonder at the towers, before instantly deciding to spare the artwork and simply torch a nearby car instead.

Surely a town of art lovers couldn't be as bad as we were led to believe? We decided to head to Watts and investigate for ourselves.

The train station seemed clean and well presented like a giant public lavatory. We excitedly stepped on to a train carriage that could have been in any major city in America, but rather incongruously was in LA. It was quite a long journey and the train became full as we got nearer to our destination. I realised as we left the metropolitan centre that my wife Edwina and I were now the only white faces in the carriage amidst a sea of Latinos and African Americans. 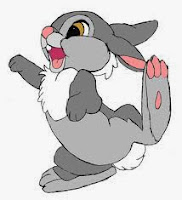 We had been to Disneyland the day before and Edwina decided to wear her crisp-new 'Thumper' t-shirt,  as depicted in the movie 'Bambi'. The juxtaposition of this look against the 'Boys in the Hood' Gangsta chic which the rest of the carriage seemed to have adopted made me want to burst out laughing, but I knew I wasn't in any position to risk losing even an ounce of street-cred. Our journey continued without incident except for one of those deaf-mute beggars who seem to exist the world-over that offer you a card instead of the usual elaborate cover story to disguise their alcohol, drug or gambling dependency. I like those stories! Is the card simply a form of laziness, or is it legit?

We eventually made it to Watts Station. I was relieved to see the towers rising majestically from the landscape. They wouldn't be difficult to find amidst the vast blocks of single story housing that seemed to comprise the majority of Watts. After the train crowds dispersed, I was surprised by how desolate the town seemed. My first thought was that everybody was at work, possibly even taking care of the carefully manicured lawns we had just left behind in Beverly Hills.

We walked towards the towers. The town didn't feel any more threatening than some of the tougher areas of Logan City near Brisbane where I grew up. It seemed to suffer from the same lack of infrastructure that left older folks stuck in their homes and bored kids wandering the streets with nothing to do. The only noticeable difference in Watts was a smashed television set in the middle of one street and more security; with bars on the windows and multiple locks on doors. Hardly welcoming!

The road opened up into a park area where the towers were located. On the ground there was a timeline depicting the history of the civil rights movement in the area, which seemed to be presided over by the adjacent towers that stood like wise-old sentinels. 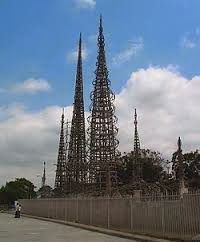 An iron fence surrounded the towers and a few other stray visitors circled the area. Presumably, there would be guided tours of the structures - but not this day. I was thankful for this - after weeks of having tour guides explain on what level we should be appreciating certain landmarks, I was happy to develop my own impressions of the towers. I didn't need any explanation to appreciate the towers - their mad glory and beauty amidst a sea of unremarkable housing was self-evident.

It occurred to me that the towers could only have been made in the time and place they had been. Tight planning regulations these days would certainly prevent any similar unsanctioned displays of creativity. It seemed like the towers were a much needed focal-point for the town, in the same way that a town square might have been in some idealised 1950's America. I'm sure Watts residents have come to appreciate the towers, but direct neighbours presumably must have lived in fear of the spires snapping off and impaling them while they slept. Luckily Rodia seemed to be confident of his abilities even though he built the towers without any plans. 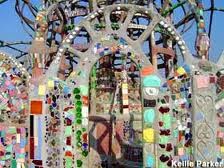 Although Rodia was an Italian immigrant, the towers, to me, seemed to be similar to the work of Spanish architect Antonio Gaudi, even down to the intricate mosaics, which in this case consisted of broken bits of pottery and even 7up bottle caps. I could imagine him picking up stray bottle tops and bits of ceramics on the way to work, while spending his days planning the next extension to his masterpiece. For all their unique majesty, ultimately the towers seemed to be simply a way for Rodia to make more interesting use of his spare time.

I had been to England and Europe a few years prior to this American trip and had surprised my friends and relatives with some less-than-insightful comments in my postcards. One comment especially stuck in my mind. I described Big Ben as being 'not that big'. Some iconic images are so saturated by media coverage, tourist pamphlets and endless documentaries that their real-life presence can never live up to the weight of the cultural baggage they carry with them. 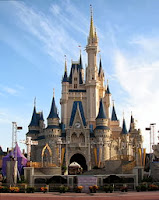 Our trip to Disneyland was a classic example of this phenomenon. The iconic 'Magic Castle' structure which appears on every Disney product in real life seemed tiny, faded and made out of cheap plywood... There wasn't even a magical flying fairy circling the castle and sprinkling pixie-dust like on all those DVD intros I have watched over the years. One can't help but feel a little disappointed!

The Watts Towers are increasingly being recognised in popular culture and have even appeared on an episode of The Simpson and in the 'Grand Theft Auto' video game series. Like Disneyland, the towers are also presented as 'one man's vision', but to me, the major difference is that Disneyland represents capitalism and the rise of consumer culture to please the masses, whereas The Watts Towers exist for no monetary gain and simply to remind people that there is still a bit of magic left in the world. Let's hope that their growing prominence in pop culture does not result in any of this wonder being diluted for the casual observer.

On my last day in America it felt enormously gratifying that something like The Watts Towers could still exist in modern America and even be appreciated and preserved. After all, isn't the myth of America supposed to be at least partly about the individual having a voice and being able to triumph through ingenuity and hard work? Surely, the Watts Towers are a prime example of this?

Thinking about the towers now - almost ten years later - they tend to mean something different to me. During the last decade I have moved from Brisbane to Melbourne and now feel like I understand the immigrant mindset somewhat. My move was not as dramatic as Simon Rodia's move from Italy to Las Angeles, but I do feel that if you move to a different town later in life you can never feel fully accepted by a native community and escape the culture that defined you during your formative years.

The best you can hope for is to insert some of your own culture into the place that you have moved to - Simon Rodia did this spectacularly with the Watts Towers.

I suppose the towers are 'outsider' art purely by this definition, but to me they are just 'art' and like all good art their meaning changes as the viewer grows older.

I wonder what the towers will mean to me in another ten years' time? 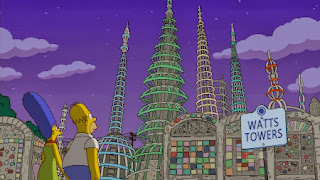