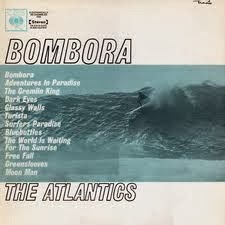 I've been an avid op-shopper since I was a teenager. Some people think I visit op-shops because I'm a cheapskate.

I believe, however, that there are other motivations behind my passion to paw through other people's garbage.

As a fan of popular culture, I can't resist the allure of marvelling at outdated trends and fashions and wondering what will be considered a fad in future and what will have lasting cultural relevance.

There always seems to be a plethora of troll dolls, Rubik's cubes and suits with wide lapels on display at most op shops; sentinels of a bygone era reminding shoppers of the impermanence of existence. Once they were icons of style and modernity, but now they're relegated to ironic party and fancy dress status. 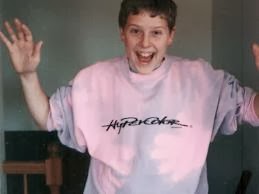 Some major trends surprisingly don't even make an appearance as second-hand attire. Where are all the 'Choose Life' and 'Go-Go' shirts from the eighties? I've never seen one in an op shop in all my years of perusal. I assume they are simply being cherished by ageing 'Wham!' fans.

I  have never seen a second-hand 'Hypercolour' t-shirt. Whoever came up with the idea of making a shirt that changes colour when you sweat was obviously a fool, but his genius was convincing a manufacturer that this was a good idea. I can only assume that the chemical reaction from the sweat caused the material to disintegrate.

The golden age of buying second-hand vinyl records from op-shops also seems to have passed. Surely, most vinyl would have been dumped in the mid-eighties when CD's became the dominant audio format?  The unexpected resurgence of vinyl-listening in the past decade has decimated the supply of the few great rock records that remained in op shops and unfortunately now all we seem to be left with are copies of 'Mrs Mills' House Party' and old Rogers and Hammerstein musicals.

It's still possible to still find the occasional unexpected classic.

I purchased the album 'Bombora' by The Atlantics in the late 90's from an op-shop. I think I paid a dollar for it. I didn't know who the group were at the time, but the simplicity of the artwork really spoke to me. The cover features a lone surfer on top of an enormous wave. It's a black-and white shot washed out in aqua with the band and album title in italics and the names of the songs featured prominently on the left-hand side. The record seemed international, but the song title 'Surfers Paradise' gave the record away as being uniquely Australian.

I instantly loved the back-cover glossary of surfing terms such as 'hang ten' and 'waxing up' and the individual description of every song on the album. In my mind they seemed to be the words of some middle-aged, cigar-chomping, plaid-suited company-man who was saddled with the task of describing something he didn't understand to kids that weren't into surfing.

The record itself came in a paper sleeve - always a sign of quality - and was made from the type of vinyl that was thick but brittle - If you bent it far enough it would snap.

The music has an endearing primitiveness to it. The whole album is completely instrumental and has an unquantifiable youthful exuberance and optimism. As you would expect from a 'surf' band, the guitars drip with reverb and the playing, whilst flashy, is not too over-the-top, with a wonderful naivety to the songs and arrangements - they even do a cover of 'Green Sleeves', which brings back pleasant childhood memories of waiting for the ice-cream man.

Drummer Peter Hood is credited as adding electronic 'gimmicks' to the album. While these are rather subtle, they do add an air of 'exotica' to proceedings. Bosco Bosonac's bass is quite prominent for an album from the early '60s and has that unmistakable 60s tone. How did they get that tone? Is it played through a guitar amp?

I didn't know it at the time, but the producer of the album, Sven Libaek went on to produce soundtrack music for underwater filmmakers Ron and Valerie Taylor, which was also used to great effect in the Wes Anderson film 'The Life Aquatic'. The Atlantics would be a perfect group for a future Anderson project. Here's hoping.

One thing that sets The Atlantics apart from other surf bands is a folky 'Greek'  flavour to their music. The guitarist, Theo Penglis is presumably of Greek descent and certainly must be responsible (at least subliminally) for this aspect of their music. My friends and I used to wonder if 'Theo Penglis' from The Atlantics was the same 'Theo Penglis' who starred in the soap opera 'Days of our Lives' in the 1980s. In the internet age, this would be an easy thing to find out, but, you know what? - I don't want to know! (I want to believe that it is)

When I listen to The Atlantics I'm reminded of the back cover of the Jonathan Richman album 'Having a Party With Jonathan Richman' in which producer Brennan Totten describes Richman's music as 'making him nostalgic for a time that never existed.'

The Atlantics make me feel this way! Almost everything I know about them has been produced in my own imagination and almost certainly has no connection to what things were like at the time the album was recorded - fifty years ago!

I haven't seen a copy of 'Bombora' around for years. I hope this is because people are holding on to it and cherishing it in the same way a Wham! fan might hold on to a 'Choose Life' t-shirt and not because they have all disintegrated like all those Hypercolour t-shirts.

Those Wham! fans might not fit into their 'Choose Life' t-shirts anymore, but I still listen to my 'Bombora' album. 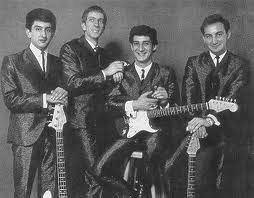