This week California passed legislation for a trial of computer-assisted driverless vehicles. I don't think they're ever going to catch on.

If other motorists are anything like me, the feeling of being in control is an enjoyable sensation and giving up this control would be akin to simply catching public transport. The only real advantage would be slightly fewer objectionable odours, stains and unhinged fellow commuters. 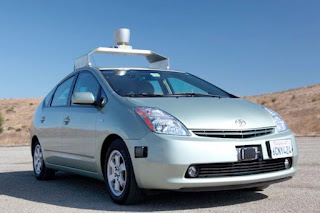 My main concern, though, is how people will release the pent-up anger and aggression that driving affords as an outlet for the average citizen. This is especially worrying in The United States where citizens have 'the right to bear arms'.

I, myself, have been known to transform from the affable Dr Jekyll that the world has come to know and love, to a sinister Mr Hyde when placed behind the wheel of a car. I'm only aware of this when there are passengers in the car with me and another car cuts me off. After the 'red mist' of rage subsides, I often notice fear and shock in my passengers' eyes. This is usually followed by a scramble for the door handle. It seems that most people would rather take their chances and jump from the car at high speed, than be in a car with the beast that has been unleashed.

This is my natural driving state and it only recently occurred to me that this is probably how my daughter picks up naughty words that I'm careful to avoid saying around the house.

There are things I simply love about driving, especially rituals involved with the long-distance road trip. I love leaving the comfort of the big city and encountering the little signs that let you know you're in the country, such as bristly-hair still on bacon ordered from road houses and milk-skin on coffee that you order by the mug. I even like whispered insults directed at us city-slicker types from the burly men in the exclusive 'truckies' section of these road houses.

One of my favourite overheard insults was on a trip with my friend Glenn. One truckie saw us approaching, rolled his eyes and whispered to his friend "Here comes George and Mildred."

Glenn has always had quite bouffant hair, so I suppose I'm George: 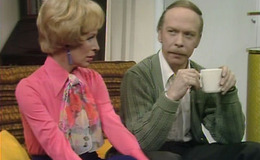 I have to admit, it does hurt my pride, though, as I find the idea of being a truck driver rather appealing. I like the idea of constantly moving and seeing new things and people every day, as well as honest work where you can see the fruits of your labour and friendships forged with people that may live hundreds of kilometres apart.

I also like country music compilations purchased from service stations (preferably on cassette), mystery food from bain-maries, cheap sun glasses and souvenir truckers' caps. I like those beaded orthopaedic seat covers that truckers always seem to have and the way kids in cars always do the 'pulling motion' to get truckers to blow their horns.

In my flights of fancy, I envisage that I'd become a talked about and beloved figure, bringing a wry smile to the faces of fellow truckers and a sparkle in the eyes of weary waitresses, when they see my rig approaching. I would graduate to being one of the elite few in the 'truckies only' section, exchanging knowing stares with other truckies when hapless city folk wander into my world.

Sadly and inevitably, one day waitresses and patrons along The Pacific Highway will be concerned that 'Big Trev' hasn't made his scheduled stop and will be inconsolable when they hear the tragic news that I have died. Considering the lifestyle, it will most likely be as a result of complications from diabetes. I know I will have died happy, though, after leading a productive and honest life, with my only secret being the location of the graves of all the missing hitch-hikers over the past few decades. 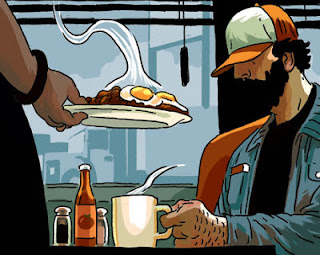 Even though I'm not a truckie, I have learned a lot about the lifestyle through innumerable trips between Brisbane, Sydney and Melbourne playing in rock bands. The first thing you learn is whether people are cut out for this lifestyle. I remember on our first trip to Melbourne, our van hit a kangaroo at about 2am in the morning. Everyone scrambled to inspect the damage and consider our options - except for our singer at the time, John - who pretended to be asleep. We were all flabbergasted! Sure, it's important to turn a blind eye on occasions when you're in a band, but this was neither the time nor the place. The band didn't last past this first visit to Melbourne.

On another trip to Melbourne (with a different singer), our friend Martin came along. We didn't have to take any musical gear, so we only hired a sedan instead of a Tarago. The journey, whilst event-free, was hellish, with poor old Martin stuck in the back seat in the middle between two drooling, drunken, smelly boys, asleep and leaning against him. This seemed like a life-changing trip for Martin, as soon after he got married, had some kids and basically straightened-up and flew-right. I'd like to think we helped him gain some perspective on his life through that trip, but the lesson I took away was 'don't skimp on the Tarago if you can afford it.'

The horrors of being trapped in the back seat are enough to make me happily drive entire trips from Brisbane to Sydney without changing drivers - but I'm not a Nazi about it - if someone offers to take over then that's okay. This is one of several unspoken etiquettes that exist on the road.


As with anything, it's always important to set goals. When we would travel from Brisbane to Sydney overnight I always liked to time it so that we would arrive in Sydney at about 9am for breakfast in Newtown (Lou Jacks was a popular destination). An early arrival would mean you would then have the whole day to muck around, shop and book into hotels before playing a show in the evening. It makes sense, but a lot of road tricks I have picked up through trial and error.

Here are some of them:


Writing this blog does instil a sense of nostalgia in me and is a painful reminder that I haven't done a road trip in a few years. Maybe I'll do something about that one of these days. I realise I'll probably never be a truckie, but that still won't stop me from grabbing a country music compilation and hitting the road.

In the meantime, I hope I've offered some informative tips and helped ignite a passion for motoring in you, dear reader.

Maybe someday I'll see you out on the roads!

Just don't cut me off!