I think it's true for all of us that there is a divide between how we see ourselves and how others see us.

In my mind I see myself as a foppish English private school boy, skipping merrily along the riverbank on the way to rugger practice with my chums - thick, lustrous locks blowing in the wind and a long fringe dangling playfully over one eye.

The reality is somewhat different. I'm a 41 year-old Aussie house-husband desperately trying to hold on to some 1990s slacker ideology. My hair is grey and wiry with a receding hairline that gives a sort of silver-mohawk effect, like some sort of over-used toilet brush that's being sold at a garage sale.

It's not what you'd call a best-case scenario.

I'm lucky, however, because I was able to hang onto my hair long enough to trick a woman into loving me and eventually marrying me. Freed from the fear of having to appeal to the opposite sex, I can now happily let myself go to seed. I do feel sorry for the poor girl, though, because what she ended up with probably looked a whole lot better in the catalogue. Buyer beware!

There is the fear in the back of my mind that I might one day find myself single again. Going on a blind date with a woman now would be the stuff of nightmares and I think I would spend the whole date apologising for my lack of sex appeal as large clumps of hair drift down into my soup bowl. The date probably wouldn't even make it to the main course. Afterwards I would retreat to catacombs under the city where I would hide away from the prying eyes of strangers and the cruel unforgiving glare of the sunlight. At least here I would be some sort of urban myth and create an air of mystery!

For the past few years I have gone to the barber sporadically and in-between have tried to cultivate an Albert Einstein look. Because I'm such a cheapskate, I consider it value for money, but also I don't enjoy the look of nervousness from barbers who seem to be trying to hide an 'Oh my god - there's nothing I can do for this guy' look of terror on their faces.

If I'm honest, I think even my attempt to look like Einstein has been unsuccessful. 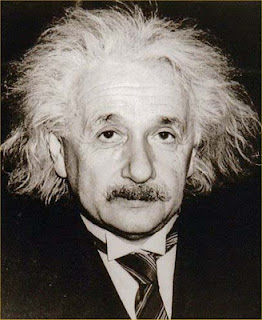 When in reality I probably look more like this: I do feel a twinge of guilt when I think about the amount of time and energy I have spent worrying about my hair and what I can do with it. Surely this energy could have been better utilised exploring world's beyond our solar system, or finding a cure for the myriad ailments that ravage our modern world?

I think it's only fair, therefore, that I share some of my exhaustive research with you, dear friends.

After careful consideration about the best possible hairstyle for a balding man, I consider this to be the champion:

That's right folks! The Danny Devito bald ponytail as featured in the movie 'Twins' wins my vote as the best hairstyle a bald man can attempt.

My reasoning for this is that, above all, you have to own your baldness and nothing shouts out 'I'm bald!' more than the contrast between the hair at the back of your head and veritable desert that exists on top. I realise that anyone attempting this hairstyle has to be supremely confident and not every man can pull this off without the added benefit of being a beloved Hollywood movie star and powerful force in the entertainment industry.

For the less successful bald man I would offer this advice:

The worst thing you can do is the combover. Wake up! - you're not fooling anybody. Also, don't waste your money on any lotions that promise miracle results or wigs. My theory behind this is that even if you can fool everybody else, ultimately you can't fool yourself. I'm sure that when Shane Warne looks in the mirror every night he still sees a chubby little baked-bean eating rampant texter with thinning hair, rather than the supermodel-dating Sam Newman-apeing nightmare he has become. 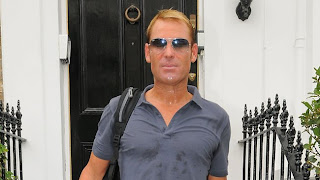 It's almost another issue entirely, but hair should also be age-appropriate and even those blessed with ample follicles should try and at least have a hairstyle that reflects the dignity of their years. Those desperately but unsuccessfully hanging on to their youthful 'dos include Paul McCartney, Rod Stewart, Ronnie Wood and Elton John's 'ginger wig'.

Only African-Americans and possibly Asians should attempt the 'shaved head' look. Sam Jackson looks cool, but Britney Spears looks less-so with a shaved head. There's an important message here - if you're going to attempt this look- make sure you're head has a good shape and is free from scars. Also, a lot of men seem to couple the 'shaved head' look with ample facial hair which, to me, gives the impression that they secretly hope their facial hair will migrate to their head.

The best look, in my opinion, for the less-confident bald-headed man is what I call the 'Sting' look: 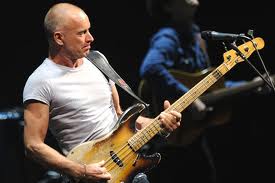 There's enough stubble to suggest that he's aware of his receding hairline and he still proudly shows it off. He also has a great-shaped head and has an air of confidence and acceptance.

Oh dear - If you want me I'll be hiding down in the catacombs.