I spend a lot of the day watching children's films with my four-year-old daughter. While I enjoy a lot of the films and even get a bit teary and emotional during some, I still like to spend my adult viewing time watching people be dismembered, possessed, stalked and tortured.

When I was a kid, I think I just wanted to watch horror films because I knew it was a taboo. It was also the early 80s and the golden age of VHS and horror films. Even today, nothing beats that grainy picture and warped sound you get from a tape that has been watched hundreds of times. I think it really adds to the macabre movie experience.

The first film I remember being truly terrified by was 'An American Werewolf in London' - especially the iconic practical-effects 'transformation' scene that was later appropriated by Michael Jackson for his 'Thriller' video. After countless horrific nightmares and waking up in cold sweats, it eventually dawned on me that the film was actually a comedy. Even more recently I was watching a re-run of it on TV and noticed that one of the evil townsfolk at the inn on the moors at the beginning of the film was Rik Mayall from 'The Young Ones'!

Our neighbours were a bit older than us and one weekend in the 1980s we spent an afternoon watching horror films at their house. This was a momentous afternoon in my horror education. This is where I first became aware of David Cronenberg's work through the film 'Scanners'. I later became a big fan of Cronenberg, but I will admit that Scanners is not his best film. It was visceral enough to get my attention at the time, though.

Another film we watched that left an impression, but has been almost universally forgotten since was 'Deadly Blessing'. I actually came across a copy recently for five dollars at a newsagent and noticed it was directed by Wes Craven who went on to do the 'Nightmare on Elm Street' films as well as the 'Scream' franchise. I didn't buy it - but in hindsight, it probably would have been worth it for the cover alone! My reasoning at the time was it probably hasn't held up too well and I didn't want to spoil my horrific memories of tiny flying orbs that would dig into your skull and then drill a hole in your brain! Some memories are too precious to taint. 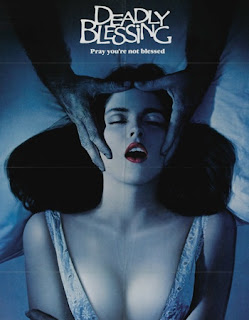 I've never been a big Wes Craven fan, but I increasingly became a fan of David Cronenberg's over the years. It was when his version of  'The Fly' came out when I was in my teens, that the rusty penny in regard to horror films dropped once again. I read a review that stated 'The Fly' was an allegory for the AIDS epidemic and since that point I have re-evaluated a lot of horror films I loved and noticed subtext that I had missed previously. I came to realise that horror films weren't necessarily mindless violence after all!

Of course, horror films are not known for their subtlety and it now seems rather obvious that slasher films such as 'Halloween' and 'Friday the 13th' (which were made in the 1970s) were a reaction to the sexual promiscuity of the 1960s and 1970s. Usually in these films the promiscuous teens would get picked off first, followed by the stoners and various other delinquents until only the 'virtuous' teenage girl survives.

Other films have slightly more subtle messages. John Carpenter's 'They Live' and George Romero's 'Dawn of the Dead' are about rampant consumerism. 'Night of The living Dead' has themes regarding civil rights and a lot of 1950s sci-fi horrors including the excellent 'Invasion of the Body Snatchers' concern the cold war. It seems most really good horror films reflect the fears of the time and even James Whale's 'Frankenstein', which is based on Mary Shelley's gothic classic, was updated to reflect the horrors of mutilated soldiers returning from war.

Really great horror films are able to tap into primordial fears, which is probably why a film such as the 1922 silent German expressionist film 'Nosferatu' (which is a thinly-veiled Dracula rip-off) still works so well. The dimly lit, grainy black and white really taps into that caveman-like fear of what is lurking just beyond the camp-fire light.

There are exceptions to the rule, of course and I think the film 'Hostel' is quite clever in the scene where sadistic rich people bid for the right to kill an American tourist. The tourist buys enough time to escape by saying something to his captor in his native German, which makes the captor hesitate. There are no subtitles and the onus is turned back on the audience (who are most likely westerners that speak only english) to consider that if they were in the same situation they would most probably die. 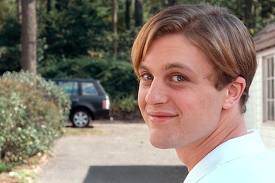 Although it is considered more of an 'art' film Michael Haneke's 'Funny Games' also toys with audience  culpability. The story concerns a home invasion by two psychotic youths. They perform various acts of torture and violence toward the family. There is one shot where one of the youths breaks the fourth wall and says something along the lines of 'this isn't going to end well' directly to the audience. He's basically daring you to keep watching, even though you know nobody is going to survive. I have to confess here that I only watched a further twenty minutes of the film. I couldn't see the point in taking the dare if you knew what the outcome would be. I'll try and watch the whole thing one-day, but I appreciate the film as a social comment.

Haneke actually made two versions of 'Funny Games' - one in his native Austria and a more recent Hollywood version. I must confess - I've only seen the Hollywood version. This is usually the case with me and even during the brief explosion of Japanese Horror, I really only managed to see the American version of 'The Ring'. My defence for not seeing the original is simple - I thought the remake was pretty good! Perhaps a lot of the defenders of Japanese horror are being overly precious, but I must admit to scoffing at the thought of seeing the Hollywood remake of the Swedish film 'Let The Right One In' because I think the original is a modern classic and shouldn't be tampered with. I admit to a double standard here. 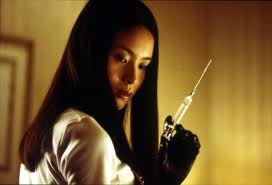 Luckily, there seems to be a trend to more 'classic' storytelling in modern times and I quite like the recent films of director Ti West who made 'House of the Devil' and 'The Innkeepers'. West's films are almost a throwback to classic 1970s and 1980s horrors but probably with more of an emphasis of character development. I think he appreciates that you need to understand and care for a character, so it matters later in the film whether they live or die.

Another director I quite like is Guillermo Del Toro. His early horror film Cronos, which concerns a wind-up brooch that offers eternal life but turns the owner into a blood-sucking monster, is certainly unique, and while he went off the boil a bit when he made the Hollywood film 'Mimic', he certainly returned to horror-form with 'The Devil's Backbone' and, of course 'Pan's Labyrinth'. 'Pan's Labyrinth' is great because it can be taken as a fairy story, an escapist fantasy or a film about the brutalites of war. It's this blurring of the lines between what is real and imagined that I quite like, which is further explored in two Spanish films that Del Toro produced for directors JA Bayona 'The Orphange' and Guillem Morales 'Julia's Eyes'.

Perhaps Del Toro understands the link between fairy tales and horror. Surely, fairy stories, like horror stories, are designed to help audiences deal with and confront hidden fears. They may even help people  hide from the horrors of the real world. With this in mind, I reckon my daughter and I do not have such different tastes in movies after all. 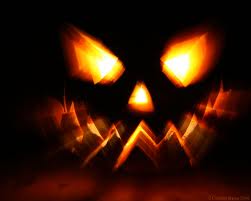