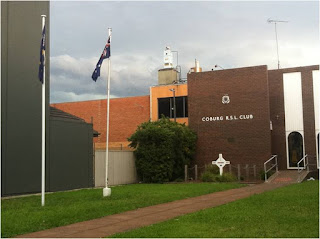 I went down to the Coburg RSL recently on the premise of seeing some local bands. Secretly, I think I just didn't want to watch the Federal election coverage on my own and needed beer and a big-screen TV for company.

During the course of the evening, I bought a two-dollar raffle ticket and was surprised and delighted to hear my number called out over the PA when the raffle was drawn. I never win anything!

What would the prize be?

I gleefully raced to the stage to receive my prize for the evening, which was presented by local celebrity and pensioner-transvestite Barb Wire.

I tried to hide my initial disappointment, when I realised that the prize I had won was actually a couple of Mr Men books.

Always being the optimist, however, I consoled myself with the thought that I could give the books to my daughter.

Except I couldn't - my daughter was now eight and way too old to read such simplistic fare as 'Mr Men.'

It occurred to me that she wouldn't be able to appreciate these books again until she was about 17. 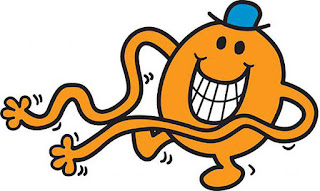 There was a period just after I left school where a lot of people I know (including myself) seemed to revert to a child-like state. With the benefit of hindsight, I can now see this for what it was: teenagers desperately clinging on to the last vestiges of childhood before having to confront the realities of the adult world.

We would all get about town at night wearing our Mr Men t-shirts, silly hair colours and brightly coloured converse, while either studying at uni during the day, or, in my case, working some menial office jobs to save up enough money for the next weekend. I was more juvenile than most - I had a pair of Thomas the Tank Engine slacks at one point!

Maybe we should have been saving money for a deposit on a house as part of a portfolio that we could negative gear in our later years, but it seemed important at the time to just blow off some steam. Perhaps some of the people who were really responsible in those early years are the ones that are going through a mid life crisis now?

Eventually the fascination with childhood waned somewhat and I went the other way instead by ironically dressing like an old man in slacks and a cardigan. It's a look I've kept to this day, but it becomes less ironic as the years go on.

Fashions come and go, of course, but it always strikes me as strange when I look at old photos now from the early days of photography and everybody seems to dress so uniformly and look so serious. I think it had to do with the expense of taking pictures before they became a much more disposable commodity. Hence, taking a photograph was a 'serious' business.

Or perhaps life was just harder?

The paradigm certainly seemed to shift after World War II when youth became something to be celebrated. It even became something to aspire to from the 1950s onwards. It seems that generations before that were eager to 'grow up' and be like their parents. Perhaps the sour expressions in some of those early photos were actually a result of crushing responsibilities at what we would now consider these days to be a very young age.

Behind the stage at the Coburg RSL there are some sombre silhouettes of soldiers which, on the evening that I attended, were contrasted rather sharply with the ramshackle indie bands playing.

I wondered what these diggers would have thought about the generations that proceeded them? Undoubtedly some would not approve of a seeming lack of responsibility and a focus on the individual, but I think ultimately what they were fighting for was a freedom of expression and with that, there also comes a need to accept points of view that differ from your own.

After the gig I went home and sat down to read my Mr Men books with a glass of wine.

When I opened them, I was surprised (and a little bit disappointed) to find they were not story books after all, but Mr Men notebooks.

This was something I could use!

In the weeks after winning the books, I have put them to use making 'To Do' lists of my daily responsibilities. Finally I have found a happy medium between the adult world and the childish.

My daughter likes to draw in the books as well!