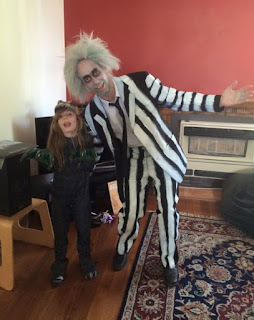 It's amazing how standards can slip over time. I once said I'd never participate in the American tradition of Halloween, but I eventually succumbed along with the rest of the population when it became too mainstream to ignore. I freely admit that I now enjoy Halloween, but it's come at a price. Halloween has dissolved my last vestige of dignity and turned me into something I swore I'd never be - a face painter!

During previous Halloweens, I've made a token effort to join in and have worn my old velvet smoking jacket, sheepishly telling any confused onlookers that I was Gomez Addams from The Addams family.

This year I decided that I wanted to impress my daughter Clementine and go to some actual effort and maybe even manage to scare her. She always seems to watch passively as people are torn limb from limb on television, but is strangely scared of such mundane things as ants and cuddly yellow labradors in real life.

I wanted her to be scared of something fantastical for a change!

I decided that Tim Burton's character Beetlejuice would be the perfect balance between not being frightened at all and being emotionally scarred for life, so I set about devising the perfect costume.

As something of method actor, I researched the character thoroughly. I watched the movie Beetlejuice, studied the character' mannerisms and even bought a copy of 'Harry Belafonte's Greatest Hits' which is featured in the movie.

The costume seemed easy enough to make, I'd simply buy an old black suit and paint white stripes on  it. This took a lot longer than I thought and was fairly labour intensive.

For the wig, I reluctantly had to buy an official Beetlejuice wig from a costume shop. I modified it somewhat by cutting the hair shorter to match the character in the movie and cutting out the 'fake' receding hair line. Nature seemed to have covered that base for me already.

The only other thing I needed was make-up, which I also bought from the local costume shop. 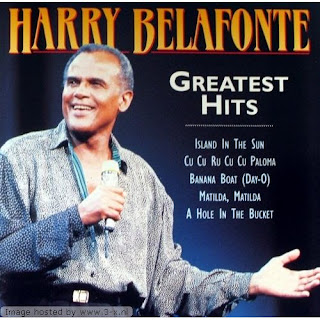 When Halloween came around we were both ready to go 'trick-or-treating.' I was dressed as Beetlejuice and Clementine was incongruously dressed as a dinosaur.

We gathered at the local park with other families to terrorise the neighbourhood in hordes. I wasn't prepared for the reaction I received when I turned up.

Maybe I'd done too good a job, but people seemed genuinely pleased to see me and were alarmingly keen to interact with 'Beetlejuice.'

This is when I realised I was not truly committed to the character.

Children and adults alike came up to me and excitedly yelled 'Hey Beetlejuice, how are you?'

It stopped me in my tracks as I searched for a response.

In the movie, Beetlejuice would have replied in a gravely tone, danced around maniacally, groped a nearby woman and greedily devoured some live insects.

I prepared my response with this in mind.

'Pretty good, I guess', I replied laconically, with my arms dangling uselessly by my side.

My admirers smiled weakly and walked away looking somewhat disappointed.

I thought back to the only two acting roles I had done in short films - 'slow-witted council worker' and 'momma's boy'. Were these the roles that would define me forever? Was this limited emotional expression all that I could conjure up?

I dejectedly walked around the streets of my suburb, Pascoe Vale, with the other parents and our children in tow. We were all concerned by the mixed message we were sending about not talking to strangers and taking lollies off them. Apparently on this one day it's okay!

On the way home I stopped for a bottle of wine at the local bottle shop. The man behind the counter still recognised me as Beetlejuice even though I wasn't wearing the wig anymore. It seems my own hair would have sufficed the whole time!

When I got back in the car I noticed that people were pointing at me excitedly as I drove off. They were happy to see Beetlejuice! I did a victory lap of the car park smiling maniacally safe in the cocoon of my own vehicle. I felt a sense of elation. I now understand why people like to be Santa Claus. It's great to make make people feel happy and take them out of the mundane.

Clementine and I went home and watched 'Hotel Transylvania' before I sent her off to bed.

I walked into the bathroom. When I turned the light on a stranger appeared before me and made me jump backwards.

I'd forgotten I was still wearing the Beetlejuice makeup!

Ironically, Clementine remained unmoved by my costume, but I had managed to scare myself.

I studied my face in the mirror. The sweat from the evening had made my make-up run and achieved the 'sinister' effect I was looking for hours earlier. It actually took a few seconds of careful study to identify myself under my disguise, but I was relieved when I finally did.

I dropped Clementine back to her mother's place the next day and started cleaning up after our Halloween extravaganza.

I considered what to do with my 'Beetlejuice' suit. It would have been easy enough to drop it off at St Vinnie's, but instead I thought I'd hang it up in the wardrobe in case I needed to concur up his powers again.

I spent the evening casually watching TV when suddenly a spider appeared in the corner of the room.

I contemplated him for a while.

'You look delicious,' I thought to myself, before cackling maniacally. 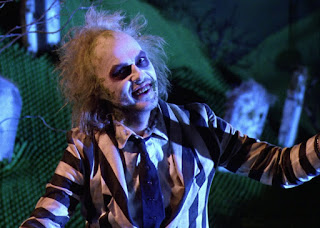