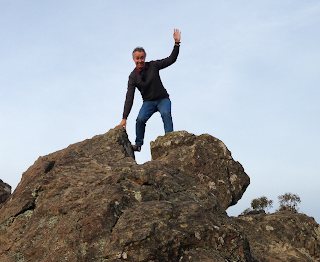 I went on a little birthday trip to the country last weekend. My sister came down from Brisbane and I thought it would be nice for us to breathe the country air and enjoy the wide open spaces instead of listening to drunk people swearing on public transport.


My initial plan was to head to a town called Daylesford, which is about a one-and-a-half hour drive from Melbourne. I was secretly looking forward to lauding my inner-city superiority and refined sensibilities over the simple townsfolk, but I was disappointed to find a neat little village with a pleasant main street that looked like it was out of a storybook. I was also shocked to find it full of sophisticated, urbane townspeople and well-behaved children.

We had a great meal at 'The Daylesford Hotel' that was better than the average pub-fare and afterwards checked out the shops on the main street. A visit to the large antique store called 'Brick Lane' unfortunately triggered the until-now dormant 'consumerism' gene in my five year-old daughter Clementine and she became obsessed with the idea of visiting 'K-Mart' to buy some figurines. This was simply not going to happen due to the sheer impracticality of the suggestion. My wife and I decided the best idea was to get Clementine out of town as fast as possible and distract her with our other plan for the day - A visit to 'Hanging Rock'.

It was about a half-hour trip from Daylesford to Hanging Rock. I was looking forward to a coffee when I got there because I was sleepy after lunch and a nap on the freeway whilst driving seemed like a bad idea. Typically, I didn't know what to expect when we arrived at the rock, because I had done no research for the trip. When I travel I don't like to think about it - I just wanna go!

On the way to Hanging Rock I was starting to have doubts that it was the same famous landmark from the Australian movie 'Picnic at Hanging'. Surely there was more than one Hanging Rock in Australia?

As we approached, however, there was no doubt in my mind it was the right one. Hanging Rock appeared majestically on the horizon like a mini Uluru and was instantly as iconic as a still from the movie.

We had no idea how long it would take to climb. Our plan was to observe from the comfort of the cafe located at the base, but two reasons compelled us to attempt the summit, even though by this time it was getting late in the day. Firstly, you can't see much from the base unless you enjoy pondering trees. Secondly it costs $10 to even enter the park! The Ebeneezer Scrooge in me insisted that I get my money's worth.

A sign thankfully informed us that it would take a mere 50 minutes to reach the top and return. I found this surprising, as the movie suggested that I might get lost for days and return bloody and dishevelled, hallucinating and clinging desperately to life. The thought of this appealed to me, but I doubt the rest of my entourage felt the same.

The walking paths to the summit were incredibly well maintained and there was no hint of any discarded garbage that you would expect from a popular tourist attraction. It seemed like our $10 entry fee was being well invested, but I couldn't help wondering if the walking tracks, cafe, tourist centre and car park were around before the film 'Picnic at Hanging Rock' made the site famous. The novel is a work of fiction, but it's true that the rock has always been a popular spot for visitors. Something about the well-worn tracks and blue arrows pointing the direction seemed to take something away from the 'authenticity' of the experience. I would have preferred to be hacking my way through the bush with a machete, but I doubt the park rangers would have approved. 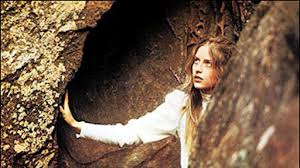 Every party that attempted the climb seemed to be aware of the movie. People were yelling 'Miranda!' at the top of their lungs - except for one boy at the summit who yelled 'I'm the king of the world'... Wrong movie, kid, but I can see where you're coming from.

I remembered from the visitor centre that Hanging Rock is quite a popular place for bands and events. There was a poster of 'Bruce Springsteen' who had played there a few months earlier. It occurred to me that Bruce seemed like a weird fit for the surroundings. Perhaps 'Miranda', the girl who tragically never returned from that fateful picnic would have found her way down the mountain if she had only followed the sound of 'Born in the USA' blasted out of a 50 thousand watt sound system?

I had considered going to see Leonard Cohen play at Hanging Rock and I think he would have been more appropriate. There is something mythical and spiritual about Leonard's music, which is the feeling that Hanging Rock can inspire if you are willing to look past the consumeristic aspects.

A few simple plaques announced some landmarks on the ascent, including a memorial to a boy who presumably committed suicide. It struck me as an odd place to try to commit suicide, as there aren't any sheer drops. It seemed more likely to me that you could just injure yourself really badly. My sister, who is a nurse, pointed out that it's really easy to kill yourself just by falling down a few steps. This was reassuring as we ascended a rocky staircase below the hanging rock that the site is named after. 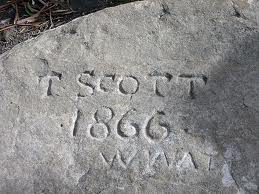 At the summit there was an engraving by T. Scott from 1866. I found this impressive and it helped me consider what the surrounding land must have looked like back then. T.Scott certainly would have reached the summit the hard way! If I squinted I could probably make out that the cleared farmland surrounding the rock was once again heavily-wooded forest. If I blocked my ears I could drown out the noise of the distant freeway and imagine a time before cars.

Still, by 1866, the Wurundjeri people, who are the traditional owners of the land, would have been long-since driven out by white settlers. It made me realise the importance the area has had for them for thousands of years. How did they feel about T.Scott desecrating their sacred initiation site? What do they think about the novel 'Picnic at Hanging Rock?'... Do they like Bruce Springsteen?

On the way down I considered the movie Picnic at Hanging Rock. Surely one of the main themes seemed to involve the contrast of the young, innocent, European schoolgirls with vast, unknowable and untameable force of nature? The girls were just a blip in history. The rock will be forever a mysterious sentinel and will still be around long after we're all gone. I felt kind of sad that we tried to tame it with a cafe and visitors centre, but then I realised that one day all those things will be gone as well - but the rock will still be there!

In all of my ponderings on the way to the summit and back, I realised by the time we hit the carpark that the person who had really had the most pure experience was Clementine. She had thoroughly enjoyed herself on a visceral level. She had no cultural, filmic, literary or historical precedents to judge her experience on and still had a wonderful time.

As I went to put Clementine in her car seat, the mystical energy of the rock seemed to dissipate and the modern world seemed to once again reclaim my daughter.

"Can we go to K-Mart now and buy some figurines?" she said.

I felt momentarily disappointed - Then it occurred to me... Maybe K-Mart has a copy of 'Picnic at Hanging Rock' on Blu-Ray! 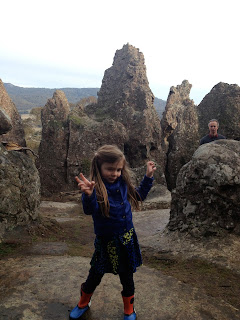