Recently I've been looking around at household furnishings and have come to a startling conclusion - I have terrible taste!

I 'm not appalled by this insight. I'm rather proud of the fact.

I realised I would much rather paw though mountains of wood-veneer panelled sideboards, kitschy commemorative coffee mugs and velvety paintings of big-eyed children, than endless aisles of assembly-line Ikea furniture. 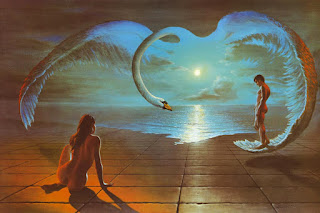 I felt the need to re-assert my love affair for kitsch after realising that my furnishings of questionable taste had silently dwindled and disappeared over the course of ten years of marriage.

On a recent expedition to replenish my supply, I came across a print that I remember fondly from my childhood, which stopped me in my tracks. It's a print that even I have to draw the line at for being 'too much.'

A quick Google search reveals that the print in question is titled 'Wings of Love' and is by the artist Stephen Pearson. It features a rather overtly sexual image of a man being delivered to his lover on the wings of a swan in some fantastical realm. Apparently it first appeared in print in 1972 and has sold some 3.5 million copies. It's not as rare as I suspected!

It left a lasting impression on me (and probably started me down the road to kitsch fandom) when I first saw it hanging above the bed in the house of our neighbours from down the road. Our neighbours were a family called 'The Gradys.'

Even though I would have been seven or eight years old, it struck me as rather incongruous to see such an exotic and fantastical image featuring perfectly-sculpted Da Vinci-esque specimens of mankind hanging above a bed in a low-set 1970s brick house in the outer Brisbane suburb of Alexandra Hills.

I only have vague recollections of The Gradys, but I remember the parents being rather conservative and dumpy-looking - not hideous, but certainly not of the calibre of human specimen that was depicted in this painting. I suppose we all need something to aspire to!

There was something very pagan about this picture. I found it weird that The Gradys would own such an image, because as far as I remember they were god-fearing Catholics. There's a possibility I may have jumped to conclusions about this, because Mr Grady was a carpenter and had a beard.

Anyway, I wondered on what level they might be appreciating this painting and what kind of things they were getting up to behind closed doors. Was there at least some level of irony involved?

One thing is for certain, the painting cemented the idea in my mind that a lot of weird things were going on in the 1970s!

I may go back today and check to see if 'Wings of Love' is still available for purchase. Maybe I can hang it above my bed and scar another generation of young children's developing minds with thoughts of what kind of person I actually am.

I'm fascinated to know if the painting still has the power to confound.

If nothing else, at least it would be a constant reminder that I need to go to the gym!
Posted by Trevor Ludlow at 17:50